“Booksmart has been compared to Superbad (2007), and it’s not hard to see why. They’re both raucous but heartfelt stories about two teenage friends trying to make the most of a big night out before setting off on different paths that will probably pull them apart. But there’s another movie that comes to mind when looking at Beanie Feldstein’s Molly — Alexander Payne‘s Election (1999), and its dogged would-be class president Tracy Flick (Reese Witherspoon), another eyes-on-the-prize striver whose ambitions have kept her apart from the rest of her classmates.

“In Booksmart, Molly, the Tracy equivalent, gets placed front and center, given a best friend and a good time. In some ways (though not in their politics), Molly feels like Tracy Flick, set free.

“And yet Booksmart can’t entirely separate itself from the kind of “you think you’re better than me” resentments that Election‘s teacher protagonist harbors toward Tracy (who does, of course, think she’s better than everyone). Molly experiences a mild comeuppance regarding her own superiority complex, but it rests on the assumption that college acceptance is a pure meritocracy, and that she’s misjudged everyone.

“Realistically, it’s more likely she misjudged the resources that those classmates had available to them. The idea that most of us really do have to work that hard to compete with those who have advantages that we never will — and that we still might not get what we want — is less comfortable as the stuff of comedy. But it’s a lot closer to the truth.” — from Allison Wilmore‘s “Booksmart Has A Blind Spot When It Comes To Class,” posted on 5.24. 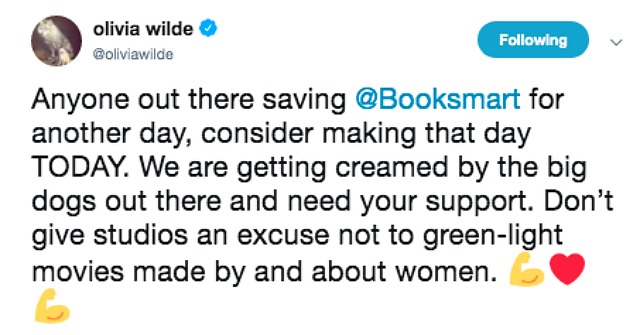 From a producer friend: “I saw the first six minutes of Booksmart that you posted and hated it. And I would be the core female audience since I hung out with the super-smart freaks in high school. Two from my gang were voted male and female class non conformists.

“You know the problem? Booksmart seems too fucking snarky. It’s all snarky one upsmanship. If that six minute opening and the trailer are the harbingers of the film, they’re driving people away in droves.

“No matter how cynical the world/and teenagers get, we all still need some sincere relief from the bitterness and cynicism. In fact we need a lot of relief from the cynicism and the fact that the biggest asshole on the planet is running the country. All you have to do is wake up in the morning to remember how fucked you are. Every morning.

“Yes, Booksmart might be realistic. But do people want to see it? Seems not.”