“Once Upon A Time in Hollywood” Is….

If you want a fast-and-hard assessment of Quentin Tarantino‘s Once Upon A Time in Hollywood, which I attempted to convey two or three hours ago, it goes like this: Four-fifths of this half-century-old Hollywood fantasy is lightly amusing, in and out, yes and no, decent and diverting as far as it goes. But the final fifth is payoff time — a taut, time-clocky, here-we-go, edge-of-the-seat finale that is absolutely insane, exuberant, take-charge and fucking-ass nuts.

I could boil it all down and simply call the last half-hour a “happy” ending, except the craziness is so balls-out unhinged…I’m obviously having trouble describing it. I have my tastes and standards and you all have yours, but by the measuring stick of Hollywood Elsewhere the finale is really, really great. As in laugh-out-loud, hard-thigh-slap, whoo-whoo satisfying. Do I dare use the term good-vibey? And the very end (as in the last two minutes) is…naahh, that’ll do.

But most of the film (the aforementioned 80%) is what most of us would call an okay, good-enough, sometimes sluggish, oddly digressive, highly restrictive wallow in the world of B-level Hollywood at the dawn of the Nixon administration.

By which I mean OUATIH is pretty much tension-free and not all that juicy except for two brawny-fisticuff scenes involving Brad Pitt‘s Cliff Booth, a laid-back, muscle-bound, serenely cool stunt man. Take no notice of any critic who claims Pitt isn’t the star of this baby and then some. Leonardo DiCaprio‘s Rick Dalton, a late-30ish actor stuck in a career slide and freaking badly, is all nerves and anxiety, a smoker of too many cigarettes and a slurper of way too much alcohol.

Who are these guys? And how will Dalton, a fading TV actor with a backpack full of fear and trepidation, find a way out of the thicket? And what role, if any, will Booth, Rick’s sidekick, stunt man and best bruh, play in turning things around, if in fact that is in the cards?

And what about those motley, zombie-like hippie weirdos encamped at the dusty Spahn Movie Ranch out in Chatsworth, whom Cliff immediately recognizes as bad ones? And how, if at all, will Rick ever break into A-level movies and thereby rub shoulders with the likes of Roman Polanski, aka Mr. Rosemary’s Baby, and his dishy wife Sharon Tate?

I wasn’t irritated or put off by the first four-fifths but I was waiting, waiting, waiting. I was fine with it being a relatively decent, often wise-assed, sometimes hugely enjoyable attitude and atmosphere smorgasbord of period aroma, jokes, flip humor, character-building, asides and “those were the days.”

But with the exception of those two hugely enjoyable stand-up-and-kick-ass scenes (Cliff vs. Bruce Lee on a movie set, Cliff vs. the mostly-female Manson family at the Spahn ranch), all I was feeling was a kind of second-gear sensation…an “okay, okay, okay but where’s the tension, what’s with all the digressions and when the hell is this movie going to step up and kick into third if not fourth gear?”

We’ve all understood and accepted for the last 16 years (or starting with Kill Bill: Volume 1) that Tarantino Land is all about revelling in the realm of B-movie grindhouse exploitation (bang-bang, muscle cars, street shit-talk, hot chicks, martial arts, kick-splatter, baseball bats, samurai swords). So those of us who long for a return to the straight-up, lean-and-mean realm of Reservoir Dogs, Jackie Brown and even the abundantly movie-ish, self-referential, cosmically fanciful Pulp Fiction…forget it. That ship has sailed. 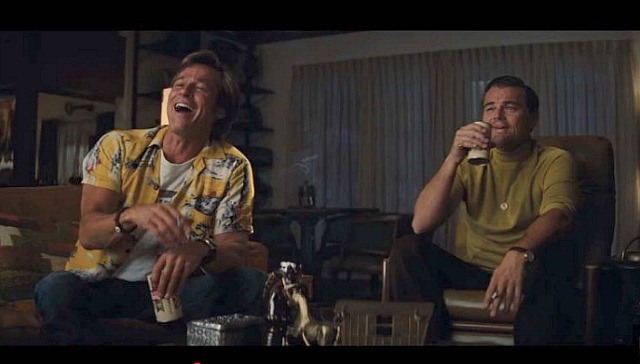 For QT isn’t the least bit interested in the 1969 Hollywood world of Midnight Cowboy, Easy Rider, The Wild Bunch, They Shoot Horses, Don’t They?, Fellini Satyricon, The Arrangement, Bob & Carol & Ted & Alice, Z, Woman in Love, Butch Cassidy and the Sundance Kid, Take The Money and Run, Medium Cool and The Prime of Miss Jean Brodie.

No, this is the realm of B-level popcorn programmers like Three in the Attic, Dean Martin‘s The Silencers, Krakatoa: East of Java and the like, not to mention shit-level TV westerns and Italian-made spaghetti westerns.

Take it or leave it, but Once Upon A Time in Hollywood is squarely on the side of late ’60s drive-in cinema. It doesn’t just offer wall-poster and marquee tributes to this aesthetic arena, but actually is one of these films.

It’s all a matter of taste and preference. But I respect or at least “understand” Tarantino’s relentless affection for this sub-strata, which of course has always been a form of half-sophisticated, half-nerd snobbery on his part.

Honestly? I’m going to try to see Once Upon A Time in Hollywood a second time tomorrow, if I can get in. Today’s viewing was just a quick dip; next time I need to swim a few laps and explore the odd angles.

I could mention all the actors in all the secondary roles (Margot Robbie, Kurt Russell as a withered version of Stuntman Mike, Timothy Olyphant as the lead in a western TV series called Lancer (a sequence in which Dalton, guest-starring as a villain and struggling to remember his lines and deliver just the right amount of mouthy menace, seems to go on forever), Dakota Fanning as Squeaky Fromme, Emile Hirsch as Jay Sebring, the late Luke Perry as a Lancer costar, Margaret Qualley as a Manson girl named Pussycat, Al Pacino as Cliff’s droll, easy-going agent, Damian Lewis as Steve McQueen, Bruce Dern as George Spahn, etc.

They’re all good and tasty as far as it goes, but this is totally Pitt’s film…don’t even debate it.

Hollywood Elsewhere approves of Tarantino having found a tree-shrouded uphill street that looks a lot like the real-deal Cielo Drive, where Polanski and Tate were renting a ranch-style, red-shingle French farmhouse, and where Dalton, hungry for that so-near-but-so-far-away aura of elite opportunity, also resides, in the next lot down.

I also love that Tarantino gives heavy play to “Good Thing,” the 1966 Paul Revere and the Raider song.

The Guardian‘s Peter Bradshaw: “I defy anyone with red blood in their veins not to respond to the crazy bravura of Tarantino’s filmmaking, not to be bounced around the auditorium at the moment-by-moment enjoyment that this movie delivers — and conversely, of course, to shudder at the horror and cruelty and its hallucinatory aftermath.”