A week before leaving for Cannes I streamed Kantemir Balagov‘s Closeness (’17), a dark kidnapping drama set in a sodden Russian backwater. The idea was to prepare for Balagov’s Beanpole, a psychological survival tale set in Leningrad just after the ravages of World War II. I saw it early this morning. It’s just as grim if not grimmer than Closeness, but it’s also more ambitious in an atmospheric, large-canvas sense. And a whole lot sadder.

Balagov is only 27, but he’s already delivering the studied chops and immaculate directorial control that are par for the course among accomplished directors twice his age. Beanpole is basically about two shell-shocked women, scarred by the horrific siege of Leningrad and trying to re-assemble their shattered lives and emotions and somehow move on. 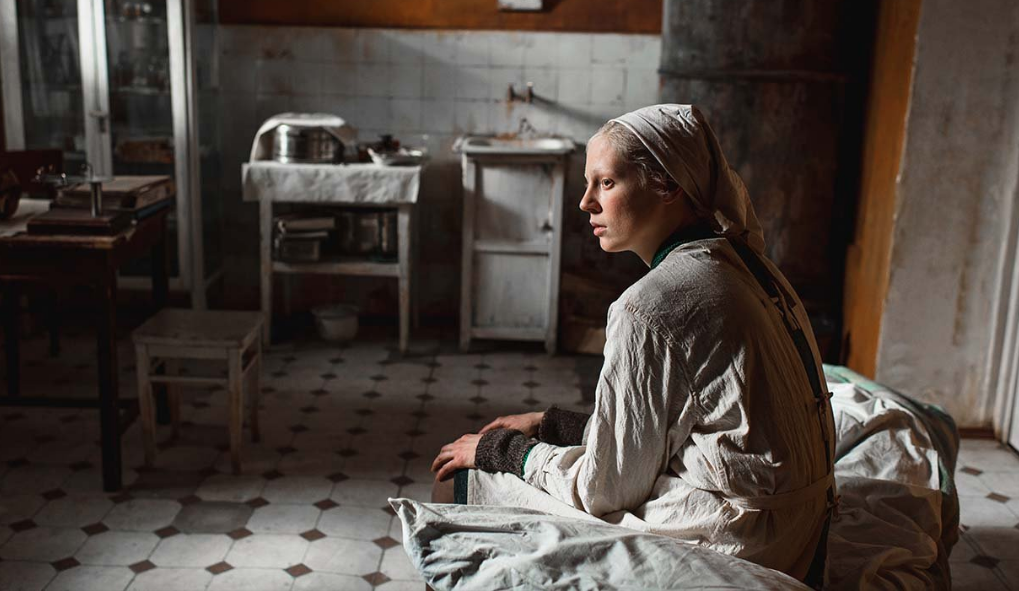 I respected the hell out of Beanpole but I honestly couldn’t derive much levitation or transcendence. To me it felt slow and trying and dirge-like. As much as I adore the idea of a 27 year-old creating a film as jarringly realistic and well assembled as this, it still left me feeling drained and dispirited. Plus it runs 134 minutes, which struck me as needlessly prolonged.

Balagov is quite the portraitist (and, to go by a just-posted Variety interview, quite the cultured film scholar), but he’s too much of a gloom-head, at least from my perspective. For this haunting portrait of post-war devastation is counter-balanced by glacial pacing and a strange reluctance or aversion to dealing with the death of a young boy…my God.

I felt sorrow and pity for each and every character, of course, but it feels too sludgy and oppressive, even for a story like this one.

Viktoria Miroshnichenko‘s titular character, Iya, is an all-but-catatonic, seven-foot-tall giraffe from whom verbal expression does not easily emanate. Why must she take 30 to 45 seconds to collect her thoughts before answering the simplest questions? Because that’s Balagov’s intention — to convey her destroyed inner state with traumatized expressions, gut feelings and minimal dialogue. I quickly ran out of patience with Iya’s blank stares, which is a way of saying that Miroshnichenko is not, in my judgment, a riveting actress.

Vasilisa Perelygina‘s Masha, Iya’s best friend, is far more interesting — more expressive and generally more alluring. If Perelygina had played the lead (which is to say if Iya had been eliminated), I would feel very differently about Beanpole. In my estimation she’s a natural movie star. But not Viktoria. Iya is impenetrable and burdensome and, as far as the afore-mentioned death of the child is concerned, inexplicable and even hateful.

The ghastly murder of Masha’s young son is “addressed” but not really dealt with, and I was simply unable to get past this. Balagov’s idea, I gather, is that if a character is profoundly devastated by war trauma, it’s within her realm to accidentally smother an innocent. In basic emotional movie-watching terms that’s simply not acceptable.

Would any mother in the history of civilization react this way?

The principal characters (excepting a 50-year-old doctor and the rich, chilly parents of Masha’s amorous suitor, a dorky kid who has a nose like Vladmir Putin) are all numb and haunted-looking, which of course is fitting and necessary. This is not a film about steady keels and bright futures. If nothing else Beanpole is quite the sweeping statement on post-war devastation.

A late-arriving lesbian attraction element kicks in and allows for a semi-hopeful ending, but it arrives too late. If the romantic attraction aspect had been a factor early on (at least starting in the second act), I would have bought into it.

If the story had been all about Masha, Beanpole would have been a much more absorbing film. I was mesmerized by Perelygina’s performance. She’s really got it.

But Beanpole is finally a movie for film festival and arthouse dweebs and not for guys like myself.