4:40 am: Quentin Tarantino’s Once Upon a Time in Hollywood was finally confirmed as a Cannes Film Festival competitor today, along with Abdellatif Kechiche‘s erotically provocative Intermezzo (aka Mektoub My Love: Intermezzo aka Mektoub, My Love: Canto Due).

Cannes artistic director Thierry Fremaux explained that that finishing Tarantino’s film, which runs 165 minutes, had taken longer than usual because it was shot in 35mm rather than digital. He described it as a “love letter to the Hollywood of his childhood, a rock music tour of 1969, and an ode to cinema as a whole.” 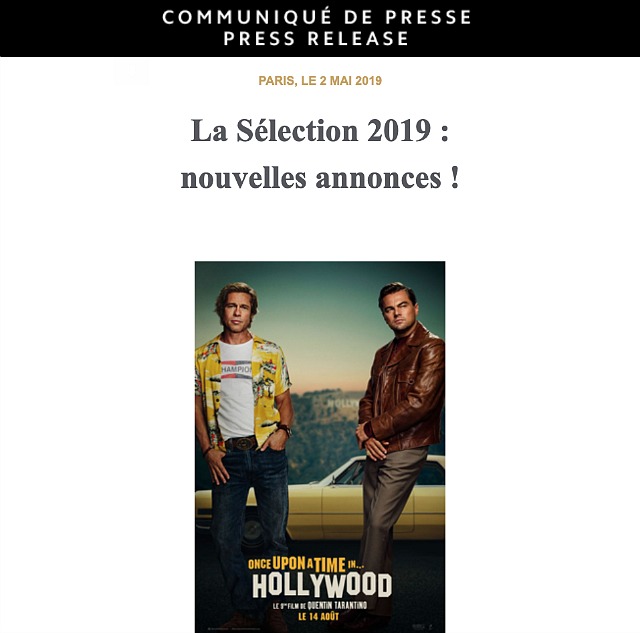 Born in 1963, Tarantino moved from Knoxville to Los Angeles with his mother, Connie, when he was three. He and his re-married mom lived with husband Curtis Zastoupil in Torrance. (A notoriously dull and spiritually deflating armpit suburb intersected with the horrid 405 freeway, Torrance is a place you want to stay as far away from as possible — trust me.) Tarantino was six and 1/3 years old when the Manson murders happened.

We’ve all been schooled about Once Upon A Time in Hollywood so I don’t need to unpack it for the 18th or 19th time.

Intermezzo is a follow-up to Mektoub, My Love: Canto Uno, the first half of a two-parter “about a Franco-Tunisian youth’s amorous pursuits.” Canto Uno world premiered at Venice in 2017, and if I remember correctly not a bird stirred in the trees after it played. Variety‘s Guy Lodge called it “another heady, alluring sensory epic, but it lacks the narrative and emotional heft of [Kechiche’s] best work.”

Fremaux said he “saw the film last Thursday, as it was still being edited, and definitely right in the middle of edits.” Running four effing hours, Intermezzo will screen at the end of the festival “so the DCP has time to get there.”

Wednesday, 9:38 pm: What’s the hold-up with the announcement about Quentin Tarantino‘s Once Upon A Time in America going to Cannes? A French dude who knows stuff has told Jordan Ruimy that it’s definitely playing the Cote d’Azur, but with the festival beginning in 13 days (Tuesday, 5.14) it’s odd that Tarantino and Thierry Fremaux are waiting this long to confirm.

From a Margot Robbie interview with Deadline‘s Pete Hammond, posted last Friday: “Everyone also is waiting with bated breath to see her as Sharon Tate in Quentin Tarantino’s Once Upon a Time in Hollywood, for which she told me she expects to be joining the cast in Cannes next month.

“That Sony film has yet to be officially announced as part of the Cannes competition, but there is rampant speculation it could screen around May 21 (the 25th anniversary of the Cannes debut of Pulp Fiction). Fremaux has publicly stated he hopes it will be ready, calling the parts he has seen so far ‘magnificent.'”

Also: Abdellatif Kechiche‘s Mektoub My Love: Intermezzo (aka Mektoub, My Love: Canto Due) may also be a last-minute announcement. Four-hour running time, strong sexual content, screening late in the festival. If this happens, the #MeToo community will probably dig into a months-old accusation of sexual assault that was levelled against Kechiche on 10.6.18.

May 1, 2019by Jeffrey Wells11 Comments
« Previous post
Impeach This Shill, This Lying Toad
Next post »
Tooth and Claw