Tweeting with an apparently sincere intent, Donald Trump implied earlier today that Rev. Jerry Falwell had a good point when he tweeted last night that Trump deserves “reparations” by way of an extra two years added to his term. With the Mueller investigation having given his administration a clean bill of ethical health (or so they believe), Trump is asserting that his first two years were squandered by the Democrats’ “corrupt failed coup,” and he should therefore be given a two-year “gimme” to make up for this.

Trump is spouting this lunacy to entertain his supporters, of course, but he’s also conveying a half-serious, sociopathic indifference to U.S. Constitutional law and procedure. The man is undeniably sick — easily the most unstable, least rational, foaming-at-the-mouth President this country has ever had, and 35% (possibly less, possibly more) of the country supports his fat ass.

“I, Donald J. Trump, do solemnly swear to preserve, protect and defend the Constitution of the United States, so help me God.” 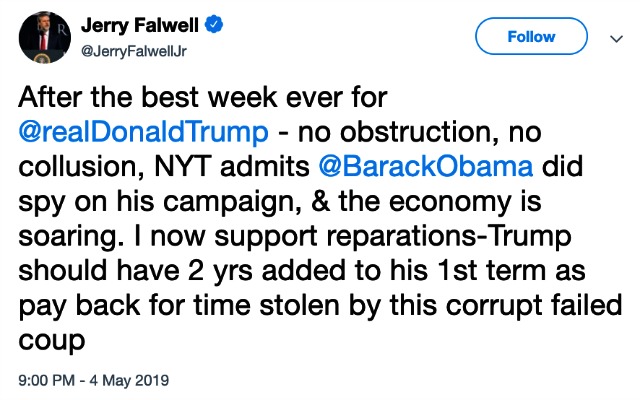