If you want to submit to a serious stress test and thereby discover how tenacious or ruthless you can be in pursuit of a coveted social goal, try getting a few words in edgewise with a world-famous celebrity at a party. The best way to manage this is to ask the celebrity’s publicist for assistance, but if you’re attempting to elbow your way into the star’s orbit on your own steam, look out. There are few exercises in life that are more naked or grasping.

The competition can be truly brutal, and the effort will almost always eat up 10 or 15 minutes of your time. Just standing there like some schmuck in a soup line…holding onto that half-smile, that look of casual expectation….beyond humiliating.

And while you’re ready to pounce into that little time-sliver of opportunity, that two-second opening when there’s a break in the conversation and you can jump in like a cat with your well-rehearsed opener…it’s really, really awful. How desperate am I? Where is my dignity? “Hey, Clint…Jeffrey Wells of Hollywood Elsewhere…we did a phoner in early ’04 for a Los Angeles magazine piece I wrote about Hollywood Republicans, and a while later I went apeshit over Million Dollar Baby,” etc. 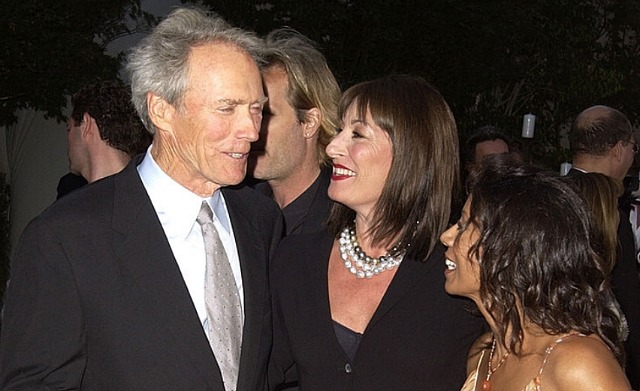 And the way some people will just barrel right in while you’re having a chat with Clint or whomever…their aggressive behaviors aren’t unattractive as much as flat-out ugly. You might think you know someone, but you really don’t until you’ve seen them smoothly muscle their way into a celebrity’s face-space with just the right amount of finesse.

Andrew Goldman to Anjelica Huston about her Prizzi’s Honor Oscar: “I’d forgotten that you won over Oprah for The Color Purple. [The other three nominees for 1986’s Best Supporting Actress Oscar were Margaret Avery for The Color Purple, Amy Madigan for Twice in a Lifetime, and Meg Tilly for Agnes of God.] As I was watching the footage of you collecting the Oscar, my blood went a little cold thinking, There’s got to be some repercussions for beating Oprah.”

Anjelica: “She never had me on her show, ever. She won’t talk to me. The only encounter I’ve had with Oprah was when I was at a party for the Academy Awards, a private residence. I was talking to Clint Eastwood, and she literally came between us with her back to me. So all of the sudden I was confronted with the back of Oprah’s head.”

Goldman: “Do you think it’s fair to say it’s because you beat her?”

Anjelica: “Well, nobody else would dislike me so much as to literally, physically come in between the person I was talking with that way. But I admire Oprah. God knows, she’s made some big steps.”