Support on Patreon Follow @wellshwood
45 Comments
What If Other Certain Filmmakers Had Never Existed? 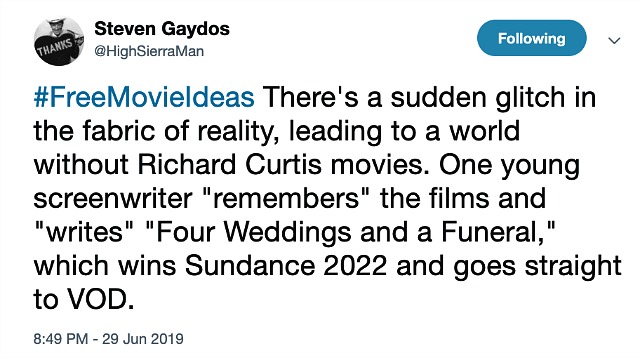 There’s a great Charles Bukowski line from one of his short story volumes, a line about how good it feels and how beautiful the world seems when you get out of jail. I can confirm that. Not only does it feel like the friendliest and gentlest place you could possibly experience, but it smells wonderful — food stands, car exhaust, sea air, asphalt, window cleaner, green lawns, garbage dumpsters. Compared to the well-scrubbed but vaguely stinky aroma of the L.A. County Jail, I mean.

We all understand what will most likely happen next year with Pete Buttigieg. Unless, that is, he somehow flips African-American opinions over his handling of the Eric Logan shooting. What are the odds of that?

Pete may or may not do well in Iowa (2.3.20) and New Hampshire (2.11), but African-American voters are most likely going to shut him down in the South Carolina primary (2.29). They’ll go with either Joe Biden for his Obama administration cred (just like they went for Hillary Clinton in ’16) and general currents of trust and familiarity, or they’ll support Kamala Harris (works for me) or Elizabeth Warren. 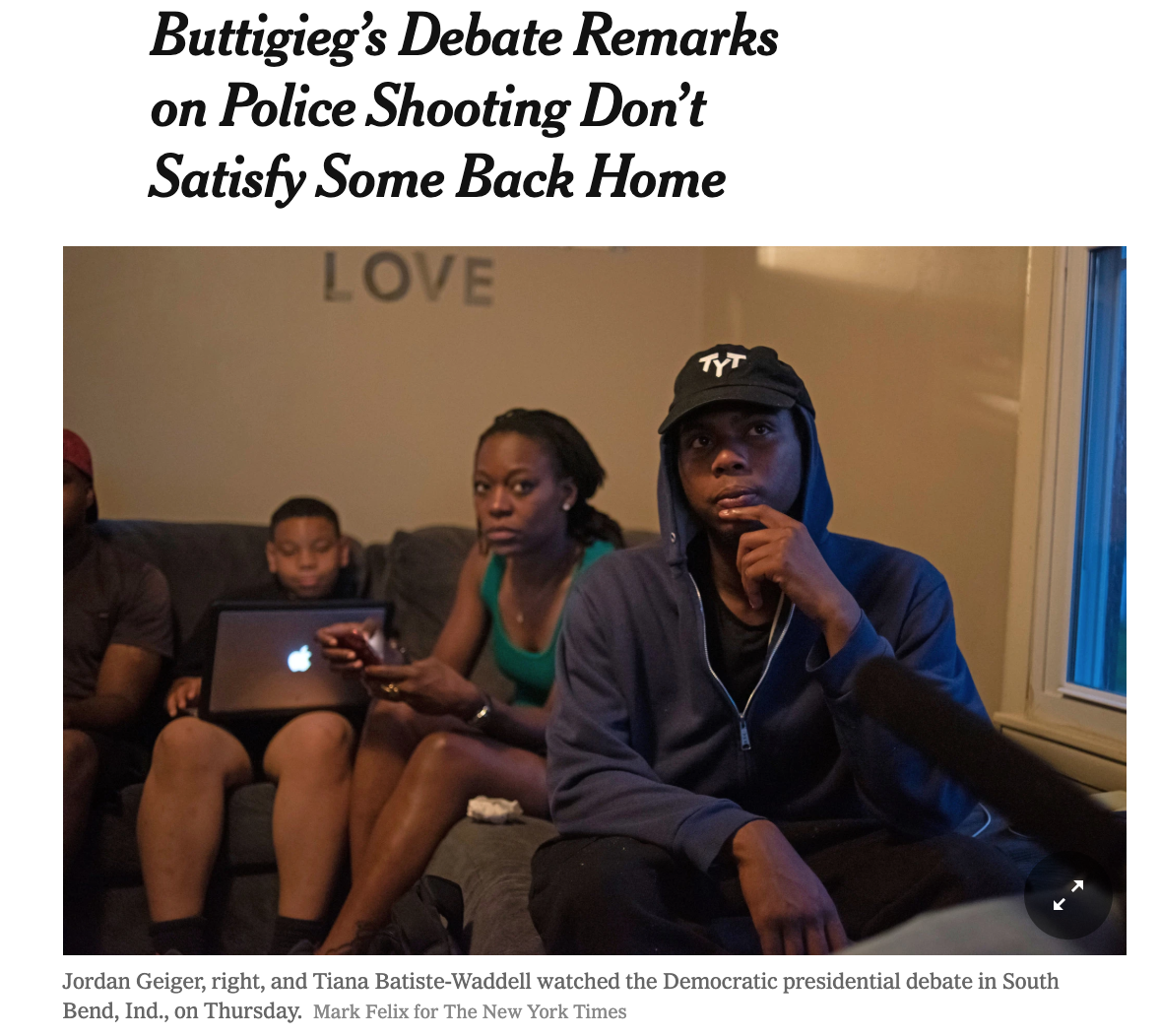 If it can’t be Pete and has to be either Biden, Harris or Warren, I’m split between the latter two. A friend insisted yesterday that Harris can’t make it with hinterland voters. I don’t believe that. I think Harris’s no-nonsense, tough-prosecutor handle might catch on but who knows?

What if Harris or Warren can’t assemble sufficient delegates to top Biden? Then we’re stuck with him. I’ll vote for Joe, of course. We all will. But what a drag if it comes down to this.

The more I think about what’s coming, the more scared I get.

Mayor Pete’s African-American problem stems from what happened in March 2012, of course. The 29-year-old Buttigieg, no doubt facing all kinds of internal pressure from upper-echelon allies of South Bend’s white police ranks, fired South Bend police chief Darryl Boykins over an illegal phone recording incident. This plus Pete’s not demanding the badge of Sgt. Ryan O’Neill over the veteran police offer’s failure to turn on his bodycam prior to the Logan shooting.

48 Comments
Faker From The Heart

Last night I finally caught Danny Boyle and Richard Curtis‘s Yesterday, which is mostly a likable but harmless so-whatter. Alternate title: “I Was A British Beatles Admirer Who Managed To Become Them When They Were Erased From Memory (and Managed to Live High On The Hog For A While Until I Was Overwhelmed By Guilt).” I actually found it mildly diverting in the early stages. But I can’t say I loved or even really “enjoyed” it all that much. Well, I did here and there. And the audience seemed happy.

I hated the fact that the producers chose only the most banal, saccharine and/or over-played Beatles standards to populate the soundtrack with. I despise “Let It Be.” All my life “The Long and Winding Road’ has made me want to throw up. If I never hear “A Hard Day’s Night” again, it’ll be too soon. (I liked it when young but it gradually wore out its welcome.) But I love “”Happy Just To Dance With You” — why didn’t they use that one? Or “Things We Said Today”? Or “A Day in the Life”? Or “Cry Baby Cry”? Or “Here, There and Everywhere” or “Good Day Sunshine”?

I did, however, like one thing about Yesterday. Tremendously, I mean. Around the two-thirds or three-quarters mark comes a scene that I hadn’t read about in reviews, and it totally blew my mind. Because of this one passage (and BE WARNED because I intend to discuss it, which will mean nothing because everyone is writing about it) I was suddenly very happy that I was watching Yesterday. Because of a certain fellow’s return to the planet earth.

Otherwise this Boyle-Curtis concoction kept boring or bugging me in little ways. I always feel put off when movies “try” to be charming or cute or huggable. I really hate it when they’re selling that shit. But Yesterday is passingly or momentarily saved from this self-defeating approach whenever the camera is on Himesh Patel, whose performance is — this is highly unusual — winningly one-note.

Patel plays Jack Malik, an adept singer-guitarist from northeastern England who becomes a worldwide phenomenon when the Beatles are suddenly erased from memory after some kind of cosmic EMP blackout, which allows Malik to begin performing the entire Beatles catalogue as his own songs because no one knows any differently. What I loved about Patel is that he plays almost every scene with the same vaguely glum, vaguely stunned “uhhm, wait, hold on…what the fuck?” expression. “One-note performance” is always a negative judgment, I know, but not this time. I seriously loved Patel in this thing, and I’m not being facetious. “This guy’s on my team!” I kept saying to myself.

Whenever a good thing happens to Jack, he kind of half-smiles but blends it in with a vaguely glum, vaguely stunned “uhhm, wait, hold on…what the fuck?” expression. Whenever something draining or dispiriting happens, he responds with what can best be described as a vaguely glum, vaguely stunned “wait, hold on…what the fuck?” expression. And so on and so forth. Nothing shakes him out of this default attitude about life, about everything.

In my head I began to believe that Patel was speaking to grumpsters like myself with this expression. He seemed to be saying “Look, I’m just playing this guy, right? I love the money and the promotional boost that this film is giving my career, but c’mon…this movie is piffle! And here I am sort of half-behaving in a piffly fashion on its behalf. Except I’m not because of my nonstop ‘what the fuck?’ expression. Which you understand.”

I could understand roughly 20% to 30% of the dialogue spoken by Lily James, who plays Jack’s manager and secret romantic admirer. She’s about as understandable as any British working-class character in a Ken Loach film, and before you start in with the cracks about my hearing understand that I’ve seen many British films in Cannes that were shown with English subtitles. There’s a reason for that.

Seth McFarlane at 3:12, responding to Bill Maher‘s observation about how all the Democrats were trying to out-elbow and out-jawbone each other: “I warmed up to Kamala [Harris] hugely last night…I thought she was fantastic. But the one candidate who seemed immune to [the competitive shouting] was [Pete] Buttigieg. If the audience was there or not, you would have gotten the same performance [from him].”

Maher: “Yes, I think that’s true. We both had that same feeling. Pete could be the guy. And again, this is so interesting about age. You can be old and dumb. He was the youngest one on the stage and I thought he looked the most mature. He looked the most real. He looked like he didn’t have to [struggle to] think…he’s like the smartest kid in the class. And we’re not just saying that because we’re gay.”

Every now and then I hear from one of my enemies. It comes with the internet spotlight. You’re probably doing something wrong if you’re not rubbing someone the wrong way. I don’t like to engage in tit-for-tat uglies with people of this sort, but I was seized this morning by a foolish impulse to try and explain my side of things. Here’s how some of it went:

“I’ve merely adopted the posture of an occasional provocateur (which I’ve been all my life but have amplified to some extent as a columnist), and you’ve taken little dribs and drabs of my considerable output over the last 20 and 1/2 years and responded by screeching and howling like Donald Sutherland at the end of Invasion of the Body Snatchers.

“Yes, I have an innate tendency to push the envelope from time to time — prod, provoke, get a reaction. But that’s ‘the brand’. I generate reams of copy every day, and a few shards have spilled over into realms that some have found offensive, because I can sound a bit rash at times and am, by and large, like most people on this planet, an imperfect, occasionally intemperate person. But I always try to take a couple of steps back the next morning and clean up the copy. Or delete a poorly-worded tweet. I hate sloppy prose. I always try to prune and hone. I value insight and despise inexactitude.

“When I say ‘some’ I mean your Stalinist p.c. snowflake types who correctly believe that career-killing is an appropriate response to criminals like Harvey Weinstein but who have also become p.c. Holy Enzyme Crusaders or, you know, advocates of “woke” McCarthyism.

“Outside of persons like yourself, the vast majority of readers have shrugged off whatever disagreements or reservations they might have with some of my views because they like the writing and the energy. I’ve been writing a column for 21 and 1/2 years now, 14 and 1/2 of them under the Hollywood Elsewhere banner, and always supported by studio ads (and to a lesser extent by HE Plus). Year after year and decade after decade I’ve stood up for the finest, bravest, most emotionally affecting films all my life. I’ve disparaged megaplex crap all my life. I’ve tried to support and occasionally bond with the best filmmakers, and adopt a comme ci comme ca attitude with those who are mainly in it for the juice and the income.

“As you know, writing is a blend of three things: (a) confessional, deep-rooted self-expression by way of convictions, insights, suspicions, arias, resentments and whatnot; (b) clarity of mind, discipline, determination and professional-level craft — all of which takes years to fuse into an instrument of finesse and persuasion; and (c) in my case a form of literary “performance art”…a personality that I’m half-“playing” in a certain sense, a literary character who doesn’t necessarily emerge in a personal day-to-day realm but who comes alive while writing.

“I’m not saying I don’t write what I believe (nothing I write would ‘land’ if I didn’t) but there’s nonetheless a certain theatrical element…a ‘crank it up a notch or two, put on a good show and leave them ignited’ mindset that blends with core convictions and beliefs.

“Ask any strong writer or performer or stand-up comedian. This is the process. Have I occasionally stumbled into a clumsy expression regarding this or that opinion, feeling, memory or observation?. Yeah, now and then. I may or may not have the God-given talent to write with cricket bats **. But it comes together nicely for the most part.