A Matter of Evaporating Trust

Posted in Park City on 1.29.19: “I was half-mesmerized by Julis Onah‘s Luce (Neon, 8.2), a tautly written, convincingly performed domestic drama about racial agendas, attitudes, assumptions and expectations. Set in an affluent Virginia suburb, the film explores a racially mixed group of characters and asks what their core-level attitudes or assumptions about “Luce” (Kelvin Harrison, Jr.), an adopted, African-born high school student, might be. But what it’s really doing is asking the audience these same questions.

“Based on J.C. Lee’s 2013 play of the same name and co-adapted by Lee and Onah, it’s basically about uncertain or ambiguous attitudes about Luce, who may or may not be as bright, likable and reassuringly well-behaved as he projects himself to be. Or maybe the real problem is in the eyes of certain beholders.

“The trouble starts when Harriet Wilson (Octavia Spencer), a vaguely huffy, side-eyed teacher, assigns Luce to write about a historical figure but with a special encouragement to ‘think outside the box.’ When Luce writes about a ’70s activist who flirted with terrorism, Harriett bristles and even freaks a bit. For whatever reason the notion of Luce being some kind of closet radical alarms her, and so (this struck me as weird) she decides to search his locker for possible evidence of subversion. She finds a paper bag filled with illegal fireworks.

“Harriet meets Luce’s adoptive mom Amy (Naomi Watts), shows her the essay and bag of fireworks. Amy tenses about violating Luce’s privacy, but at the same time is grappling with concerns about her son, who was reared in a war-torn African nation during his first ten years, and the kind of person he may be growing into. Or perhaps is hiding behind a veneer of charm and good cheer.” 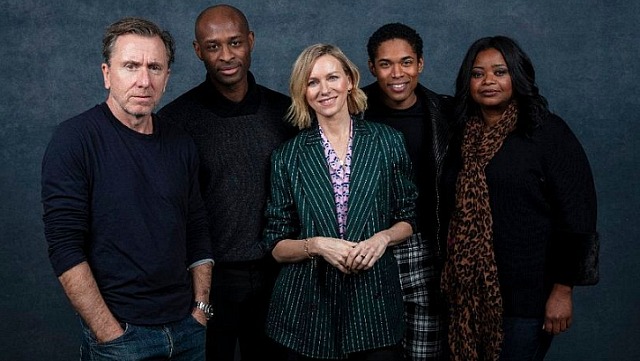