For the first time in the history of U.S. presidential elections, a strong majority of likely Democratic voters — 57% — is in favor of electing one of two Presidential candidates who will hit 80 less than two years after taking office.

We’re all healthier and more athletic these days, 70 is the new 60 and Joe and Bernie have always sounded fairly sharp and shrewd to my ears. (Although Bernie has always struck me as the more lucid.) But anyone with older grandparents or great-grandparents knows what 80 and beyond tends to be like for the most part. Not always (depending on genetics + lifestyles) but often enough. 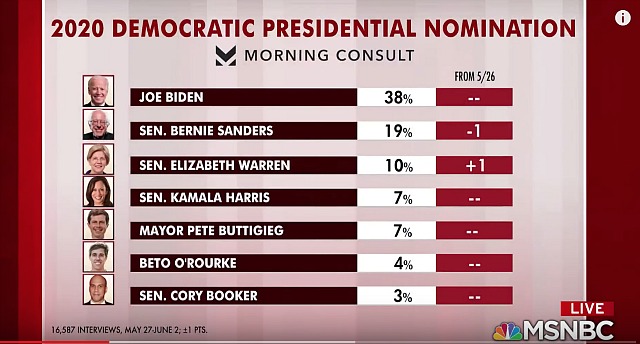 People generally enjoy 45 years of dynamic prime-time expertise and accomplishment, usually from age 30 to 75. Or 25 to 70. Or 35 to 80 or something like that. Ronald Reagan, our second oldest President, was in his late 70s at the end of his two-term Presidency. The prospect of a U.S. president turning 80 at the beginning of a first term has never been considered before, much less regarded as a likely scenario.

This is a totally new thing in the history of this country, and it seems to me that no one is really getting into this out of a general fear of sounding ageist, which the p.c. community correctly regards in the same light as racism, homophobia and fat-shaming. (Godzilla–shaming isn’t the same thing.)

I despise ageism, but that doesn’t change the fact that this country’s voters have never before seriously considered the idea of an 80something President. Think about this for 30 seconds.

If your gut you know it feels like a better idea for a younger person to succeed Trump. It just does. But I’m deathly afraid that Elizabeth Warren, whom I love and respect, might not prevail in the general election, although I can’t imagine anyone of sound mind not preferring her to Cheetoh.

It’s hitting me over and over what a terrible jam the Democrats are in right now. There’s no candidate except for Mayor Pete who’s really got the magic mojo, who’s exactly right for the job and who’s exactly the right age. And yet only 7% of likely voters favor him.