In every major industrial democracy there are varying levels of concern about the flow of unmitigated immigration from the Middle East, Northern Africa, Central America and Mexico. It’s not so much an economic, party or principle thing as (I know this sounds overly primal and primitive) a simmering matter of blood and tribe. Sad as it seems, right-leaning European and North American natives have been reacting fearfully and in some ways violently. (The recent Rome attacks upon allies of Cinema America by far-right groups is but one example.) Natives of Europe and North America are sensing cultural and territorial threats.

I’m not sensing the slightest threat of anything from my home in West Hollywood, but it’s been fairly well documented that rurals in this country (i.e., those who have the least contact with immigrants) are somewhat agitated about this. And it has concerned some that almost all of last night’s Democratic contenders raised their hands in support of restoring protection under the Deferred Action for Childhood Arrivals program as well as pledging to provide health care for the millions in the country without documents. 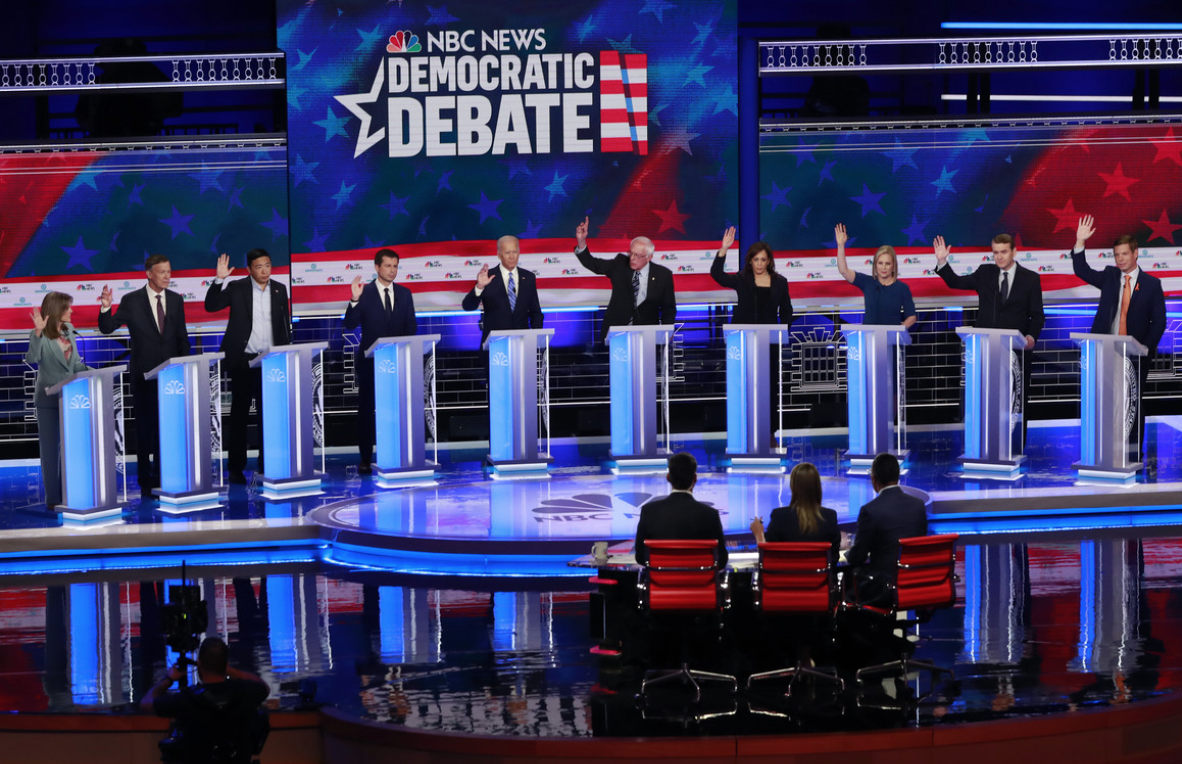 I don’t know what the wisest or fairest solution might be, but earlier today Politico‘s Jeff Greenfield supplied two Presidential views on the matter.

President Bill Clinton in his 1995 State of the Union address: “All Americans, not only in the states most heavily affected but in every place in this country, are rightly disturbed by the large numbers of illegal aliens entering our country. The jobs they hold might otherwise be held by citizens or legal immigrants. The public services they use impose burdens on our taxpayers. That’s why our administration has moved aggressively to secure our borders more by hiring a record number of new border guards, by deporting twice as many criminal aliens as ever before, by cracking down on illegal hiring, by barring welfare benefits to illegal aliens…it is wrong and ultimately self-defeating for a nation of immigrants to permit the kind of abuse of our immigration laws we have seen in recent years, and we must do more to stop it.”

President Barack Obama in a 2014 interview with ABC News: “That is our direct message to the families in Central America: Do not send your children to the borders.” The U.S. Border Patrol, he said, should be able to “stem the flow of illegal crossings and speed the return of those who do cross over … Undocumented workers broke our immigration laws, and I believe that they must be held accountable.”

The title of Greenfield’s article is “Did the Democrats Step on a Second Big Land Mine?“, and the subhead states the following: “On immigration, they’ve steered the party close to an open-borders policy without any serious reckoning with how to handle the influx of arrivals.”

Donald Trump tweeted during the debate last night that “all Democrats just raised their hands for giving millions of illegal aliens unlimited healthcare. How about taking care of American Citizens first!? That’s the end of that race!”

A friend told me this morning that he fears that the immigration issue (i.e., an apparent “open borders” policy endorsed by all major Democratic candidates) may lead to another Nixon-vs.-McGovern race in 2020, and with Trump the victor.

Greenfield: “[Trump] may well be wrong about this; the specter of abandoned, hungry, sick children subject to the tender mercies of federal enforcement officers has struck a responsive chord. And a Democratic candidate who can combine an appeal for comprehensive immigration reform with a genuine effort to stem the flow of new arrivals may find that a powerful message.

“Right now, however, all of the candidates (except perhaps for Joe Biden, whose half-hand raise was a masterstroke of noncommittalism) have put themselves clearly on the record for sharply liberalizing immigration, and none appears to be willing to say anything with any specificity about one question: Should there be any limit on who gets to come to the United States? Is there room enough, are there jobs enough, is there health care funding enough, to accommodate everyone?

“Right now, it seems clear that if either of the past two Democratic presidents had shown up Thursday and advocated their positions from five or 20 years ago — the ones that helped them win a general election — they would have been booed off their own party’s stage.”