Mayor Pete Did Nothing Wrong

Will someone please explain what it is that Mayor Pete did or failed to do in response to the recent South Bend police shooting of Eric Logan?

There have been so many seemingly racist shootings in this country that when a black guy is plugged by the bulls, it’s automatically presumed that racist attitudes and a failure of the cops to show proper restraint are the main reasons. There’s no other reaction that people are willing to entertain these days. Black dude = innocent. White cops = Satan’s spawn. White mayor = can’t be trusted.

And so Mayor Pete got yelled at by protestors earlier today because…this is what I don’t understand. Was it because he’s not African-American and therefore can’t understand or empathize? The South Bend protestors appeared to doubt Pete’s sincerity in trying to address and correct the situation. They suspected his main motive in returning to South Bend was because he’s running for President. But what is it that he failed to do exactly? 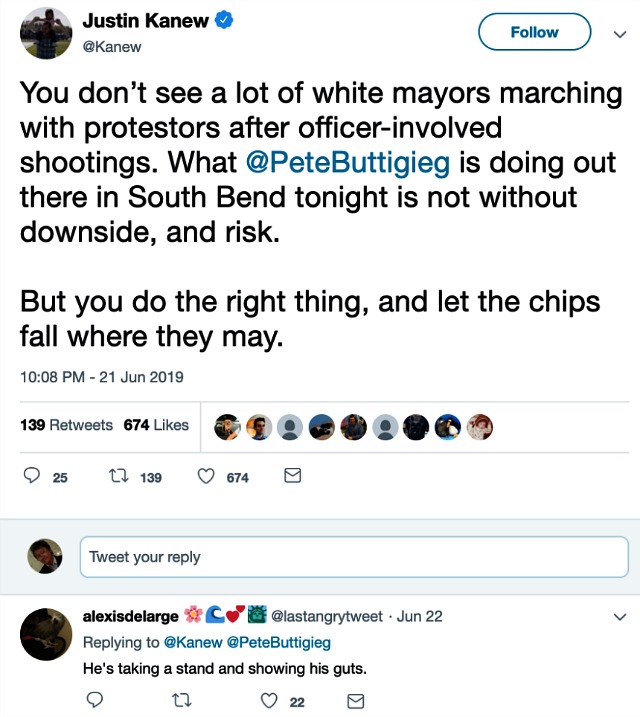 Mayor Pete’s “error”, apparently, was failing to immediately fire or suspend the police officers involved in the shooting.

According to a N.Y. Times report, Buttigieg “responded point by point to ten protestor demands, agreeing to some — such as requesting the Department of Justice appoint an outside prosecutor — and coolly explaining reasons for rejecting others. ‘The first demand concerns the firing of police officers,’ he said. ‘The laws of the state are…that’s decided by a board of safety.'”

N.Y. Times: “Logan, 54, was fatally shot by an officer responding to reports of a man breaking into cars downtown. The authorities said Logan flashed a knife and lunged at the officer, who shot him once in the abdomen. But the officer had not activated his body camera. [Plus] Logan’s family questioned why he was taken to the hospital in a police car rather than an ambulance.”

Low-information black voters were already cool to Pete, according to polls. Too measured, too cerebral for them. They also didn’t like Bernie in ’16. Just not their kind of candidate. They apparently only like Uncle Joe and Kamala.

June 23, 2019by Jeffrey Wells46 Comments
« Previous post
Parable About Humanist Values vs. Go-Along Normalcy
Next post »
“I’ll Play It For You…”