Among my initial reactions to Rocketman, filed during the Cannes Film Festival: (a) I respected the traditional musical scheme and the Ken Russell-meets-All That Jazz theatricality, (b) it’s a “better”, more ambitious film than Bohemian Rhapsody, and yet (c) the only portions I actually “liked” were the first 40 or 45 minutes’ worth (i.e., the young-Elton English stuff), and (d) that once Elton hits the big-time in Los Angeles and starts self-destructing with booze and cocaine (a section that lasts 60 to 70 minutes) the film becomes…well, a bit tiring. 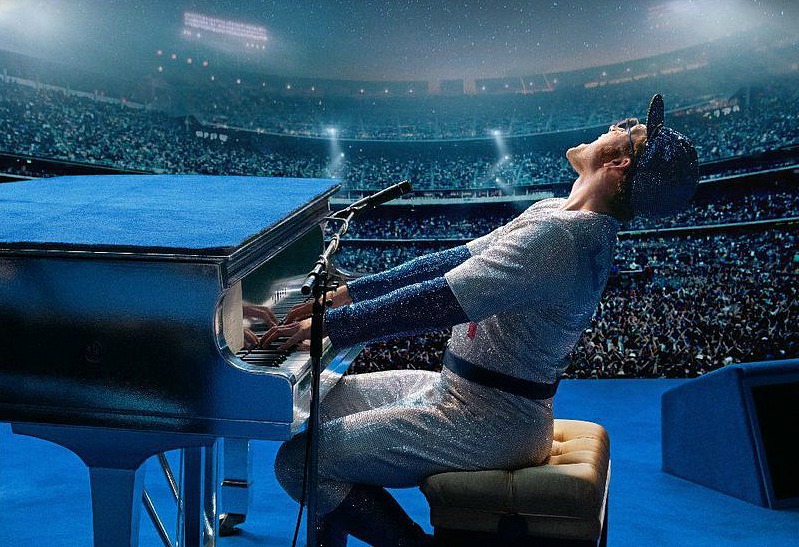 I paid to see Rocketman again last night with Tatyana, and experienced roughly the same reactions. Except, that is, for (d) — those 60 minutes of flamboyant self-destruction don’t play very well the second time. Like, at all.

I’m not walking back my view that Rocketman is a “better” film than Bohemian Rhapsody — it’s certainly more ambitious — but it’s boring to watch a guy snort coke, guzzle vodka, wipe away tears and snarl at people in scene after scene. Get to rehab already!

My advice to those who liked Rocketman after a single viewing is to leave it there.

Tatyana was moderately okay with it and appreciated the early song-and-dance sequences (“I Want Love”, “Saturday Night’s All Right for Fightin’) but she, too, felt that some scenes dragged on for too long during the second hour. She said she liked Bohemian Rhapsody better. She respected Taron Egerton’s performance and thinks he’s a good actor “but I noticed the time when I was watching Rocketman, but I never noticed the time with Rami Malek.”

I’ve mentioned this before but Egerton bothers me. His singing voice isn’t close to Elton’s, and he doesn’t begin to physically resemble him. Plus he’s taller, broader and more muscular than the Real McCoy. I’m sorry but Egerton just isn’t right. Plus he’s constantly “acting”. I’ve seen Elton twice in concert, talked with him at a party, been listening to his songs since the Nixon administration, etc. And I just can’t give in to Egerton the way I submitted to Malek-as-Freddie Mercury.