Sold As One Thing, Despite The Reality

Yesterday HE commenter “Jax” wrote the following assessment of Booksmart: “Just saw this. Breaking news: IT’S NOT THAT FUNNY. Sarcasm and snark [which] all the new comedies have, but no real wit, and no real dramatic tension between the leads until the end. The scene with the dolls was GREAT, but you can’t make a movie out of that.

“Plus the film is a wolf in sheep’s clothing. It’s been talked up on the chat shows as a great coming-of-age comedy a la American Graffiti or Fast Times at Ridgemont High. Actually it’s a crypto lesbian comedy with a semi-hot lovemaking scene (with a gross joke) and a strong feeling for the sisterhood of two young women. Not what the audience signed up for.”

I’m sorry but the instant that I read “crypto lesbian comedy” I had to admit that this label is somewhat on-target, at least when you compare the actual content of Booksmart vs. how it’s been sold. 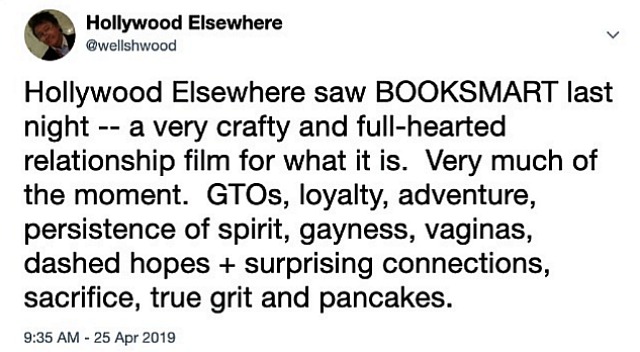 I happened to enjoy Booksmart for what it is (partly because it seems to be reflecting late-teen mores and attitudes among GenZ types in big-city cultures) but I also refrained from describing it as a semi-lesbian thing, as did almost every other critic in the world.

Because anything more than a cursory mention of a gay current can lead to wokester-wolf-pack suspicions of vague homophobia, so the smart thing is to discreetly allude to a film’s sexual atmosphere without saying “this is what it is”.

Which is why you’ll never read the term “crypto lesbian comedy” or anything like that from anyone who writes for Indiewire, the official journal of wokester politics and attitudes.

The marketing of Booksmart, in short, played the old “hide the ball” game — selling it as an edgy, whipsmart teen odyssey (which I for one bought into, having said it was “as fulfilling and well-honed as a 21st Century high-school farewell thing could reasonably be”) when in fact it’s a little gayer than what anyone has officially copped to.

Another thing we’re not allowed to mention these days is the fact that the LGBTQ community reps 4.5% of the U.S. population. Add your enlightened urban/suburban liberals and wokesters and the core allegiance factor is still on the marginal side.

Name some other significant “hide the ball” marketing campaigns, whether or not they resulted in a film’s commercial success.