Respect and affection for the late Rutger Hauer, who passed a few days ago at age 75.

A grand, gentle fellow with a flirting-with-extremes personality, Hauer will always be remembered for two iconic ’80s roles — Roy Batty in Blade Runner (’82) and the creepy John Ryder in The Hitcher (’86) — along with his last hoo-hah performance in Hobo With A Shotgun (’11). I’m not forgetting or dismissing his ’70s work with Paul Verhoeven — Turkish Delight (’73), Soldier of Orange (’77) and Spetters (’80) — but the above three are the keepers.

Hauer was taking cigarette breaks when I interviewed him in Park City eight and a half years ago for Hobo. He was 66 then, and we all know that you can’t smoke at that age. If you need to go there smoking is for your teens, 20s and 30s. You have to quit by age 40 — no negotiations.

My Rutger Hauer encounter this morning was smooth and mellow. Hobo With A Shotgun, which I saw directly after, is a relentlessly low-rent Troma splatter film — another ’70s grindhouse flick in “quotes.” (You don’t mind the awful dialogue spoken by the bad guys, right? Of course you don’t!)

But the title and the whatever-you-want-to-make-it metaphor are brilliant, and Hauer, 66, is reaping the benefits. His scumbag-blasting bum is the most iconic role he’s played since The Hitcher (’86), and before that Roy Batty in Blade Runner (’82).

If I was a director-writer, I’d write something for Hauer in which he plays the absolute opposite of an enraged, socially-avenging hobo. I would cast him as a rich, hip sculptor who lives in lower Manhattan — a guy who meditates and writes poetry, knows how to prepare Northern Italian cuisine and has his grandkids over on weekends. I would leave the hobo behind and never look back.

Hauer is gentle, polite, considerate. Being a famous actor he’s used to a certain amount of attention. And (I mean this in the most admiring way possible) he’s a bit of an eccentric. He talks about whatever mood he might be in. He goes outside to smoke. He politely declined to drink Bloody Marys with everyone else. (Discipline!) He wore black Converse lace-up sneakers — very cool.

Two months ago I wrote that I was getting an Extremely Loud & Incredibly Close vibe from John Crowley‘s The Goldfinch (Warner Bros., 9.13). I tend to have difficulty with trauma-recovery dramas, especially those involving terrorism. And I have to be honest — I don’t like sensitive little boys who wear glasses.

Nothing has changed with the new trailer.

The “whoo-whoo” backing vocals on “Sympathy for the Devil” were added when Keith Richard‘s girlfriend, Anita Pallenberg, chimed in during a take and the Stones liked how it sounded. Pallenberg sang it on the record along with Richards, Brian Jones, Bill Wyman, Marianne Faithfull and Stones producer Jimmy Miller.

Miller: “Pallenberg was the epitome of what was happening at the time. She was very Chelsea. She’d arrive with the elite film crowd. During the recording of ‘Sympathy For The Devil’ when I started going ‘whoo, whoo’ in the control room, so did they. So I had the engineer set up a mike so they could go out in the studio and whoo, whoo for real.”

48 Comments
Prick Up Your Ears

I find the phrase “there are five second acts in this movie” totally fascinating. I’ve never once assessed or evaluated that a film has this problem. (If in fact it is one.) Multiple second acts! Hollywood Elsewhere-wise, this is an entirely fresh analytical construct. I can’t even think of a film that has multiple second acts, but that means nothing as I’m still grappling with this. Perhaps the HE community could point out examples of well-known films that have multiple second acts. 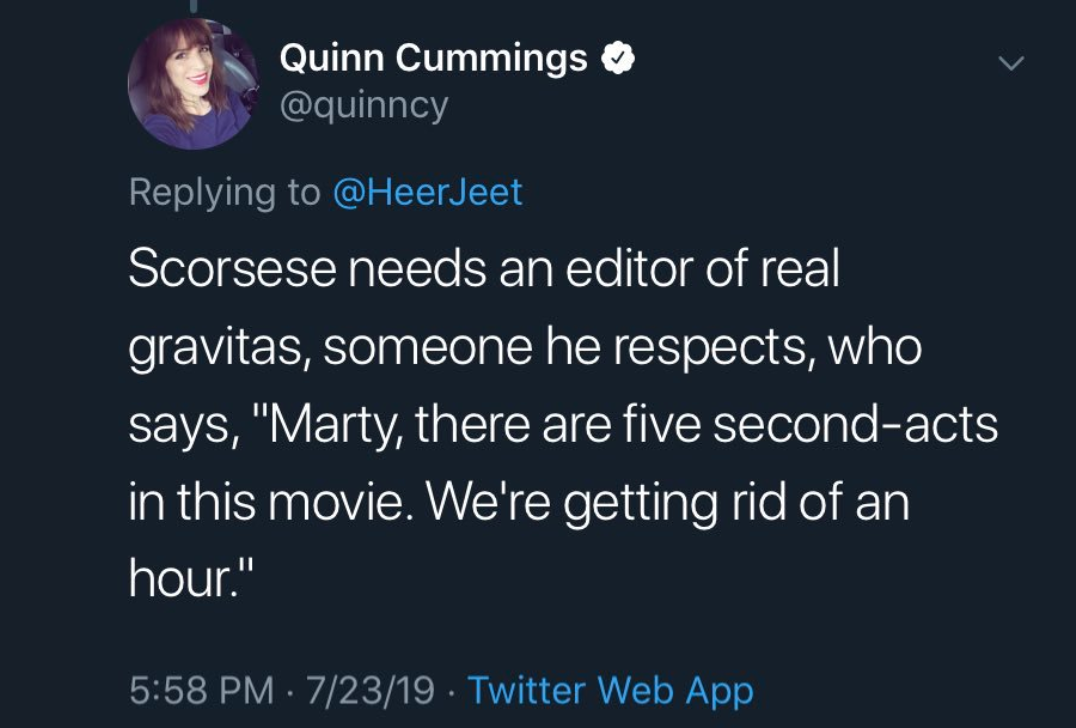 I’ve pasted a bold X next to those 2019 Toronto Film Festival films that I believe will actually matter (or aspire to matter) to persons of consequence, and will presumably stick to the ribs. Tell me what I’m missing or should pay closer attention to.

TIFF World Premieres (i.e., not going to Venice and Telluride):


TIFF North American Premieres (going to Venice but not Telluride):

Not mentioned in TIFF announcement</u>:

Sometime in the late summer or early fall of ’93 I did a Movieline interview with Leonardo DiCaprio, when he was 18 or 19. He had recently done What’s Eating Gilbert Grape?m but he’d shot up since and was rail-thin and sharp as a tack in conversation. We did lunch in The Grill in Beverly Hills, a noisy place favored by agents, producers and lookie-lous. I remember sitting in that booth and listening to him free-associate while saying to myself, ‘This kid’s got it…I can feel the current.’

Now Leo is 44 and goateed and filled-out (the string-bean physique disappeared 20 years ago) and talking about how Once Upon A Time in Hollywood is a bit of a dinosaur enterprise (shot on film, intended for theatres, invested in physical sets and a certain kind of classic filmmaking), and I’m slapping my head as I realize that this guy who was the age of a high-school senior in ’93 is identifying with the old guard…he’s saying “wow, the world is changing but I hope we can keep making this kind of film for people to see in theatres,” etc.

It’s one thing to hear an older GenX or boomer-aged person lament the way things are going with streaming and whatnot, but to hear a relatively young guy like Leo say this…well, I’ve said it. Leo will be 50 in five and 1/3 years.

The trailer for Kasi Lemmons‘ Harriet (Focus Features, 11.1) feels a little too on-the-nose. The obvious gold standard in this agony-of-slavery realm is Steve McQueen‘s 12 Years A Slave, but I’m not sensing a similar degree of investment and authenticity. Tonally it reminds me a little bit of Nate Parker‘s Birth of a Nation. (In that 2016 film the hateful young white slave owner was played by Armie Hammer; here the same type of character is played by Joe Alwyn.) I loved Cynthia Erivo in McQueen’s Widows, but Janelle Monae isn’t exuding “period” vibes. Harriet will play the Toronto Film Festival, but not Venice or Telluride. I’d love to see Harriet become an important, must-see film, if for no other reason than the Trump administration’s reported decision to delay the Harriet Tubman $20 dollar bill until at least 2026.

Based on Christine Leunens‘ “Caging Skies“, Taika Watiti‘s Jojo Rabbit (Fox Searchlight/Disney, 10.18) is a satirical absurdist comedy — a jape, a goof. The trailer makes it clear that Watiti (Thor: Ragnarok, the forthcoming Thor: Love and Thunder) has zero interest in investing in the reality of early 1940s Vienna or anything else in that cultural, historical or geographical vein. It’s as if the Max Fischer Players had adapted Leunens’ book. The idea is to lampoon and have a general giggle about the absurdity of Naziism, anti-Semitism and racism itself.

“Mr. Mueller, the president said your report found, in his words, ‘no collusion, no obstruction, complete and total exoneration.’

“First, did your report find there was no collusion?

“Second, did your report find there was no obstruction?

“Third, did your report give the president complete and total exoneration? 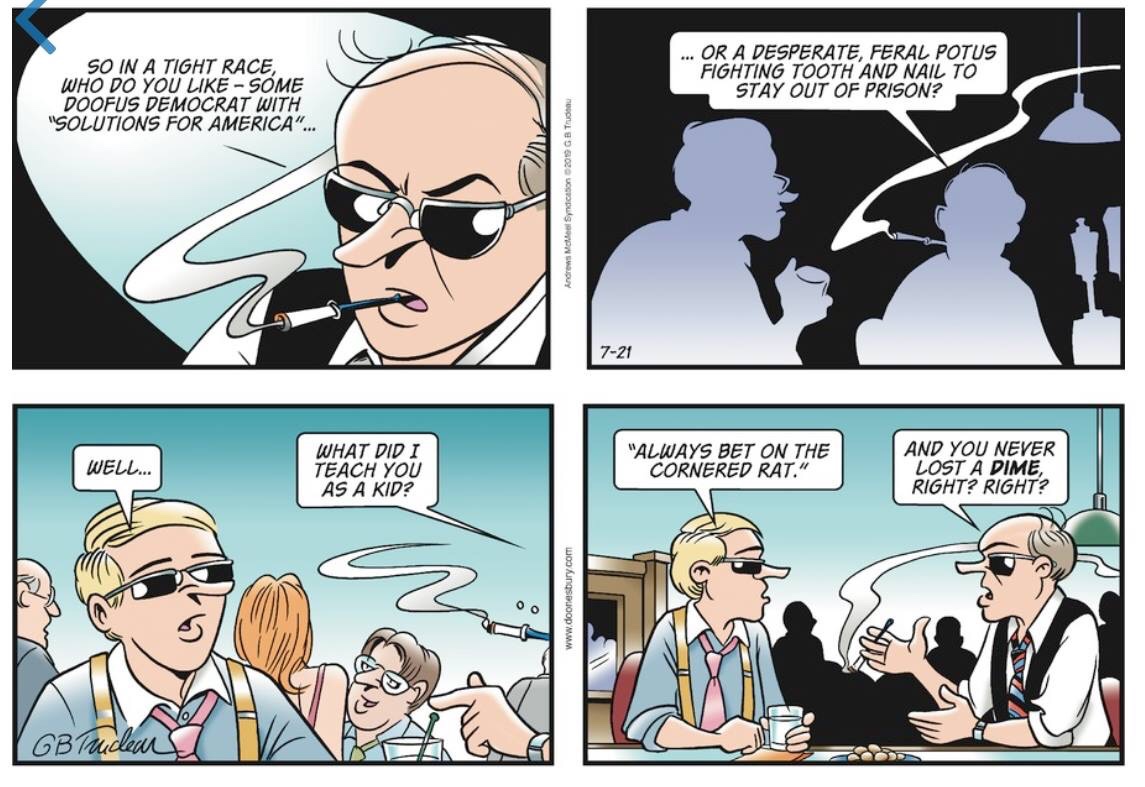