In a national poll of average American voters (7.6 thru 7.8), Emerson has found — are you sitting down? — that Donald Trump nudges out Kamala Harris, Elizabeth Warren and Pete Buttigieg, 51% to 49%.

This isn’t a dream — it’s a nightmare. 51% of the respondents actually stated that it’s better to stick with the compulsively lying, amoral, raping, racist, criminal, traitorous, climate-change-denying, ADD-afflicted authoritarian fraud that they know than three liberal accomplished Dems whom they don’t know so well.

That’s it…between this and the climate disaster that will be lapping at our shores within 70 or 80 years, this country is officially finished. A slight majority of voters actually prefers the most odious, incompetent and self-deluding U.S. president in the nation’s history because they don’t like the idea of a woman of color from Oakland, a progressive bespectacled schoolmarm or a brilliant, 37 year-old gay teenager taking his place. These are their actual persuasions. 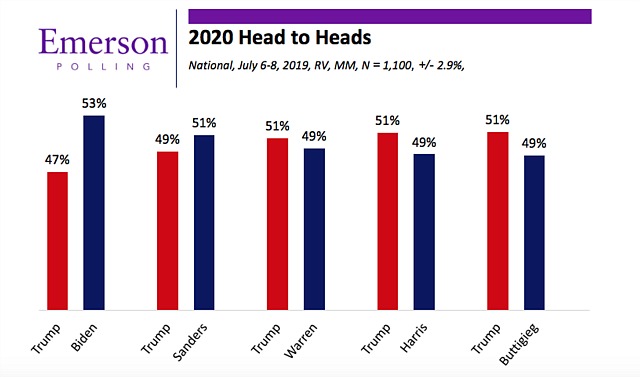 It crushes my spirit to acknowledge this, but “Typewriter Joe” Biden is the only one who has Trump beaten by a significant margin (53% to 47%).

Emerson quote #2: “President Trump’s approval has ticked up one point from the June national poll, with 44% approval and 48% disapproval. In June, the President’s approval was at 43% to 48% disapproval. Trump continues to hold a strong lead in the Republican primary with 91% of the vote against former Gov. Bill Weld at 9%.”