Yesterday The Hollywood Reporter‘s Scott Feinberg seemed to draw an analogy between Tuesday’s Emmy nominations, which ignored many performances by well-known movie stars, and a February ’18 Vulture assessment of certain Academy nomination preferences by the “New Academy Kidz.”

It would seem, in other words, that changes within the TV Academy (new members, new rules, new thinking) are affecting the nominations.

“Emmy categories were announced on Tuesday, recognizing virtually every aspect of the TV business,” Feinberg began. “One thing, though, was noticeably missing from this year’s list that has been a staple of previous years: a large presence of movie stars (or, at least, people who first established themselves on the big screen before moving to the small). 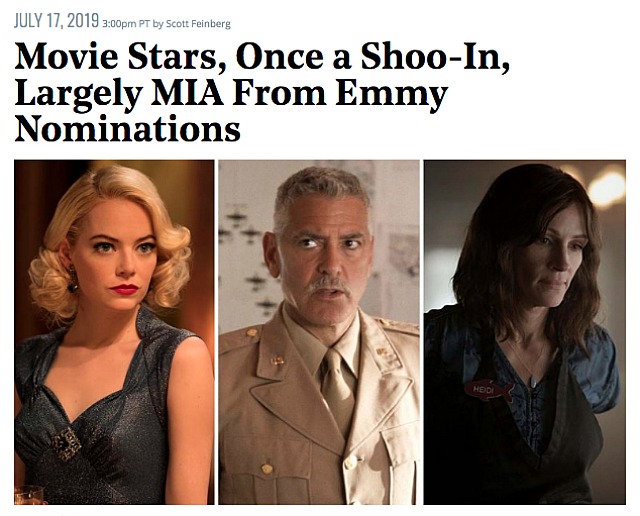 “New voter” quote from Vulture‘s “We Polled New Oscar Voters: How Are They Changing the Way the Academy Thinks?” by Kyle Buchanan [now with N.Y. Times], Stacey Wilson Hunt and Chris Lee:

“’In general, it just feels like there is a feeling that we have to award people who have maybe been overlooked before. It’s about not wanting to award people who they have been rewarded a lot in the past. Maybe we need to give someone else a chance. I definitely think, whether [it’s] conscious or subconscious, [this is] happening.”

Consider again a quote from HE reader “filmklassik” in a 1.24.18 piece called “New Oscar Bait Hinges on Tribal Identity“:

“It’s a bit cheeky to say ‘never ever again’ (because who the hell knows), but yeah, in this particular cultural moment it is all about Tribal Identity. And what’s disturbing is, we have a whole generation now for whom tribal representation is, to use one critic’s word, numinous. The under-40 crowd has invested Race, Gender and Sexuality with a kind of cosmic significance. It doesn’t mean a lot to them — it means everything to them. Indeed, much of their conversation and writing seems to always come back to it.”