On Wednesday morning the Morning Joe team aired a video of Donald Trump and Jeffrey Epstein schmoozing, cavorting and thick as thieves at some kind of easy-pickings Mar-a-Lago party in ’92.

Trump has portrayed himself as estranged from Epstein since the billionaire’s criminal history of soliciting and sexual trafficking recently re-surfaced; the video indicates that Trump has been lying about this, at least as far as the early ’90s were concerned.

In a 10.29.02 New York magazine profile of Epstein, Trump was quoted as follows: “I’ve known Jeff for 15 years. Terrific guy. He’s a lot of fun to be with. It is said that he likes beautiful women as much as I do, and many of them are on the younger side.” 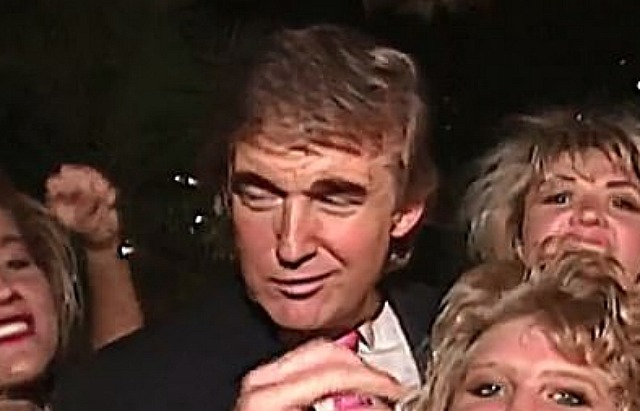 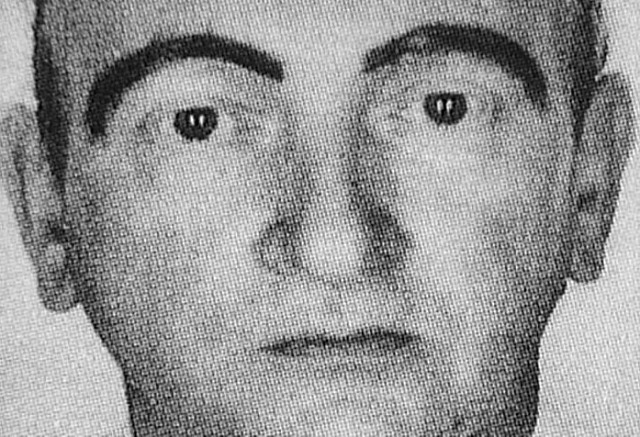 The late David Ferrie, a JFK assassination conspiracy suspect by the sights of Jim Garrison. 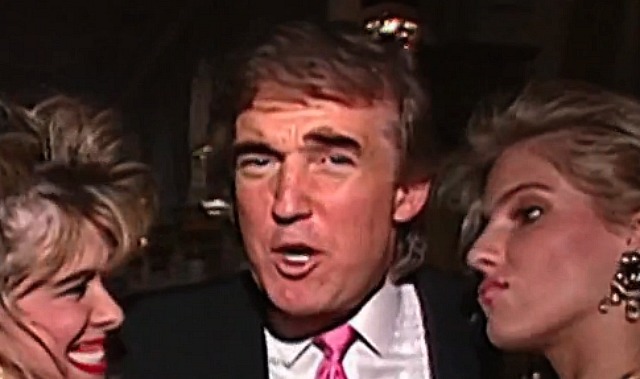 The thing that got my attention, and I mean a visual aspect that leapt right out in a WTF sense, is the apparent fact that Trump was wearing extra-dark, seemingly dyed eyebrows during that Mar-a-Lago party, which happened when Trump was 46 and Epstein was 39.

In the God-knows-how-many-thousands-of-photos snapped of Trump before and after this ’92 soiree, he’s never had these weird black caterpillars. They initially reminded me of the ones worn by Akim Tamiroff in For Whom The Bell Tolls or those Martin Scorsese cat eyebrows.

Before he became a blonde Trump’s hair was medium light brown, and swarthy brows aren’t exactly characteristic of people with fair Germanic complexions.

Then it hit me…of course! These are the inky, paste-on eyebrows worn by Ferrie, a suspect in the mid ’60s Jim Garrison investigation of the JFK assassination.

Carlos, Trump’s personal valet prior to ’92 Mar-a-Lago party: You’ll forgive me, sir, but perhaps…well, your eyebrows.
Trump: Whaddaya mean, Carlos?
Carlos: It’s only that they’ve never been this dark, sir.
Trump: They look weird?
Carlos: A bit.
Trump: Well, I’ll tell ya, Carlos. A couple of months ago I finally saw JFK…that Oliver Stone film? And I was very affected by Joe Pesci‘s performance as David Ferrie. By his eyebrows, I mean. Very striking.
Carlos: I saw it also, sir, but the idea was to make Pesci…Stone was attempting to emphasize that Ferrie, who actually wore inky, paste-on eyebrows…to emphasize that there was something venal and grotesque about him.
Trump: Maybe you’re right, Carlos, but I’ll be fraternizing with a lot of very young women this evening, and I don’t want my eyebrows to look older or middle-aged.
Carlos: Whatever you say, Mr. Trump.

July 17, 2019by Jeffrey Wells17 Comments
« Previous post
Big Names Elbowed Aside in Emmy Noms
Next post »
Cause For Concern