Goin’ to New York for “The Irishman”

The 57th New York Film Festival will premiere Martin Scorsese’s The Irishman at Alice Tully Hall on Friday, 9.27 — i.e., opening night. Hollywood Elsewhere will be there for the NYFF press screening, and also at the Friday night public screening if I can swing it.

The Irishman will be released in select theaters “later this year”, according to a release, followed by Netflix streaming.

It’s a $200 million, decades-spanning saga of the life and times of Frank Sheeran (Robert De Niro), a labor union leader and alleged hitman for the Bufalino crime family. 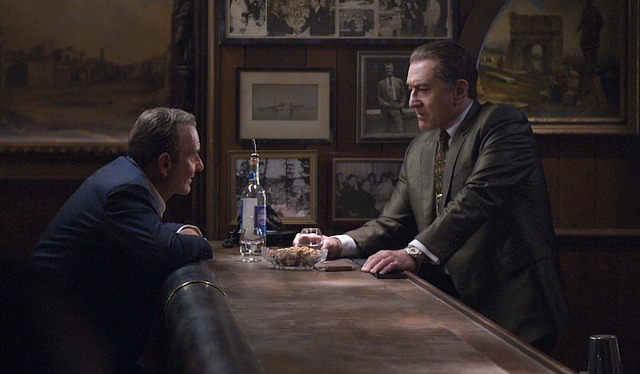 Earlier this month I read a very early draft of Steven Zaillian‘s Irishman screenplay. On 7.9 I wrote that it conveyed a tone of finality, and that it reminded me of the ending of Goodfellas as well as the last few minutes of The Godfather, Part II.

Excerpt: “It really does seem to be a melancholy summing-up of the whole Scorsese criminal culture exploration that began 46 years ago with Mean Streets. A fascinating assessment of what this kind of life amounts to, and what it costs in the end.”

Joe Pesci stars as Pennsylvania mob boss Russell Bufalino, with Al Pacino portraying Teamsters president Jimmy Hoffa. The film will utilize extensive de-aging technology to tell its time-spanning story. Scorsese’s intention from the get-go, of course, was that these and other actors would de-age without the “uncanny valley” effect.

Statement from NYFF festival director Kent Jones: “The Irishman is so many things: rich, funny, troubling, entertaining and, like all great movies, absolutely singular. It’s the work of masters, made with a command of the art of cinema that I’ve seen very rarely in my lifetime, and it plays out at a level of subtlety and human intimacy that truly stunned me. All I can say is that the minute it was over my immediate reaction was that I wanted to watch it all over again.”