If You Deal With Dogs…

I’ve done no reporting on the relationship between veteran hotshot publicist Peggy Siegal and odious sex trafficker Jeffrey Epstein. I therefore have no argument with that 7.19 Hollywood Reporter piece, written by Gary Baum and Scott Feinberg, that basically asserts that Siegal used poor judgment in having had certain dealings with Epstein in a professional capacity.

The apparent motive behind the piece was basically to paint Siegal with a dark, career-wounding, guilt-by-association brush.

If I had been in Peggy’s shoes I would have certainly kept my distance after Epstein served his sweetheart Florida sentence, but she’s not a demon for adopting what boiled down to a look-the-other-way attitude. Remember that people in p.r. are always attracted to and dealing with people in possession of great wealth and powerful connections. It goes with the territory.

It’s also a common fact that big-time publicists sometimes rub shoulders with possibly shady fellows in this or that respect. It happens; it’s fairly common.

Where, for example, was the Hollywood Reporter article that besmirched the reps of Weinstein Co. employees who knew or strongly suspected what Harvey was up to, sexual manipulation and assault-wise, but said and did nothing? It’s very easy to point fingers in hindsight. 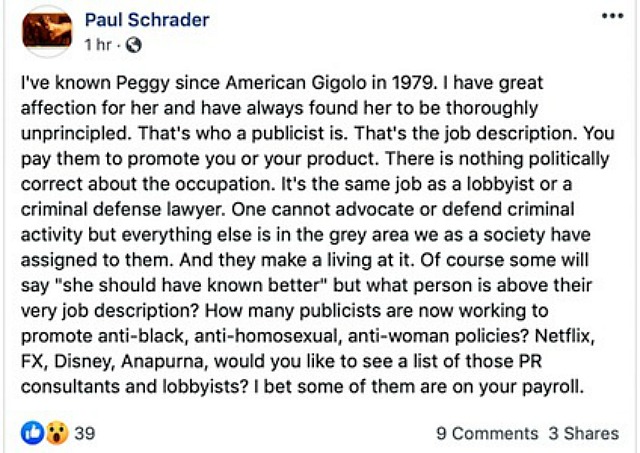