I don’t know about anyone else, but I’m suddenly feeling a mixture of super-negative emotions — bummed out and trembling with anger — after reading a 7.9 Variety story that says Dwayne Johnson, Gal Gadot and Ryan Reynolds will score “massive paydays” (i.e., $20 million each) to costar in Red Notice, a Netflix thriller about art thievery.

Matt Donnelly and Brent Lang are reporting that Reynolds will be paid $20 million with Johnson making that plus “millions more” from a producer’s fee. Gadot is “expected to make the same after salary and the streamer’s practice of buying out typical ‘back end’ profits stars would make from a theatrical release.”

I felt even worse when I read that director-writer Rawson Marshall Thurber (the Mysteries of Pittsburgh + Skyscraper guy whose six-syllable name makes me twitch with discomfort) will be paid $10 million.

On the surface Red Notice sounds like just another slick escapist package, this one about an “Interpol agent tracking the world’s most wanted art thief.” Apparently another reworking of a familiar genre. Entrapment, Ocean’s Twelve, William Wyler‘s How to Steal A Million, the 1999 remake of The Thomas Crown Affair…there are only so many ways you can slice this kind of pie.

When I read this story my very first thought was “eff you guys and your huge effing paychecks.” Not that I want Netflix to take a bath (I don’t), but I won’t be unhappy if these actors have a harder time landing a super payday when they negotiate their next deal.

I’ve been accustomed to the idea of life being unfair since I was 11 or 12, but the idea of these three plus Thurber being paid $70-million plus to deliver an art heist movie? My blood boils.

Due respect and apologies to Netflix, but I now have an attitude about Red Notice. 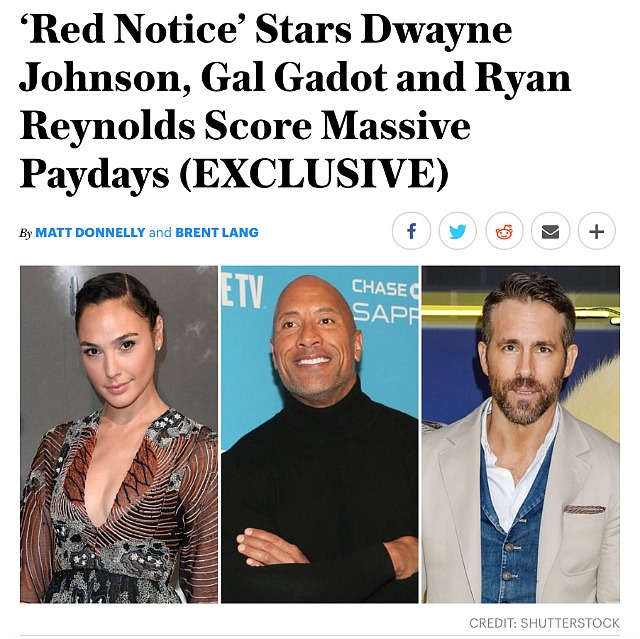