Earlier today I was sent a decade-old draft of Steven Zallian‘s The Irishman. 134 pages, dated 9.15.09. I read the last ten pages, and then the first ten pages. And then a ten-page passage somewhere in the middle. I’m presuming it’s been intensively developed (refined, added to) over the last few years, and that the odds of it bearing a substantial resemblance to Martin Scorsese’s finished film version are…who knows? But they could be slight.

I’m not sure I want to read all of it, but I may not be able to help myself. Because Zallian’s Obama-era script is so spare and direct and absorbing, such a page-turner, so seemingly familiar with the behavior, rituals and language of 20th Century northeastern criminals, and so meditative and authentic and “final.”

Remember the ending of Goodfellas with the sound of a jail cell slamming shut? I got a similar feeling from this, but in a withered old man vein. It also made me think of the last few minutes of The Godfather, Part II. It really does seem to be a melancholy summing-up of the whole Scorsese criminal culture exploration that began 46 years ago with Mean Streets. A fascinating assessment of what this kind of life amounts to, and what it costs in the end.

A $200 million, decades-spanning saga of the life and times of Frank Sheeran (Robert De Niro), a labor union leader and alleged hitman for the Bufalino crime family. Presumably coming to your local cinema in a few months’ time. 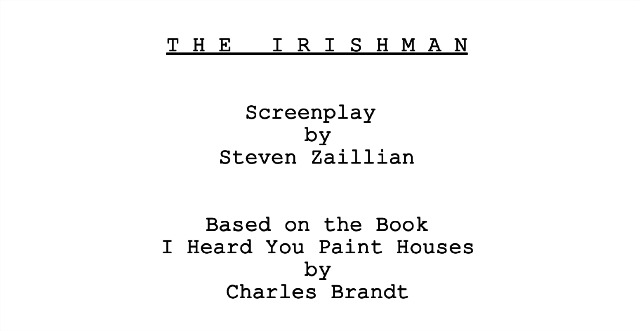