“Lincoln” Fades In The Mind

If a movie really has that special punch and pizazz, most of us can remember certain portions and lines. I’ll bet I’ve memorized dialogue from a thousand movies, maybe two or three thousand. Name any memorable film from the 1930s to today and I’ll recite a line or two. If not I’ll at least describe a distinctive shot or two, or something about the cinematography or production design. Go ahead — name one. I’m a walking film library. I can do this all day long.

I’m mentioning this because it hit me this morning that I can’t remember a single line or moment from Steven Spielberg‘s Lincoln. I remember that early, completely unbelievable scene in which Daniel Day Lewis chats with two black Union soldiers (Colman Domingo as Private Harold Green, David Oyelowo as Corporal Ira Clark) and two white ones, but I don’t recall a word of the dialogue. I recall Oyelowo reciting a portion of the Gettysburg Address from memory, but I mostly recall muttering “bullshit”.

I remember Janusz Kaminski‘s milky, shafts-of-light cinematography, but he always shoots in this fashion. I remember the tone of DDL’s performance (and that he won the Best Actor Oscar), but I don’t remember a single one of his lines….not one. I recall that it won an Oscar for Best Production Design, but I also recall being enraged by the use of filtered sunlight inside the U.S. Senate chamber, which of course has no windows.

I also recall that Lincoln doesn’t offer a single establishing shot of the White House or the U.S. Capitol (the huge dome of which had recently been completed in early 1863) in the entire film. No images of how the White House South Lawn or Pennsylvania Avenue or the Treasury building or the Potomac might have looked.

I remember writing about the state of plumbing in the Lincoln White House of the 1860s, and an HE commenter making a joke about the nation’s 16th president “dropping a deuce” at some point in the second act.

If you can’t remember a single good scene or line, the movie probably wasn’t that good to begin with.

Final sentence of my 11.8.12 review: “The bottom line? Lincoln is a good film, deserving of respect and worth seeing, but it happens at an emotional distance and feels like an educational slog.” 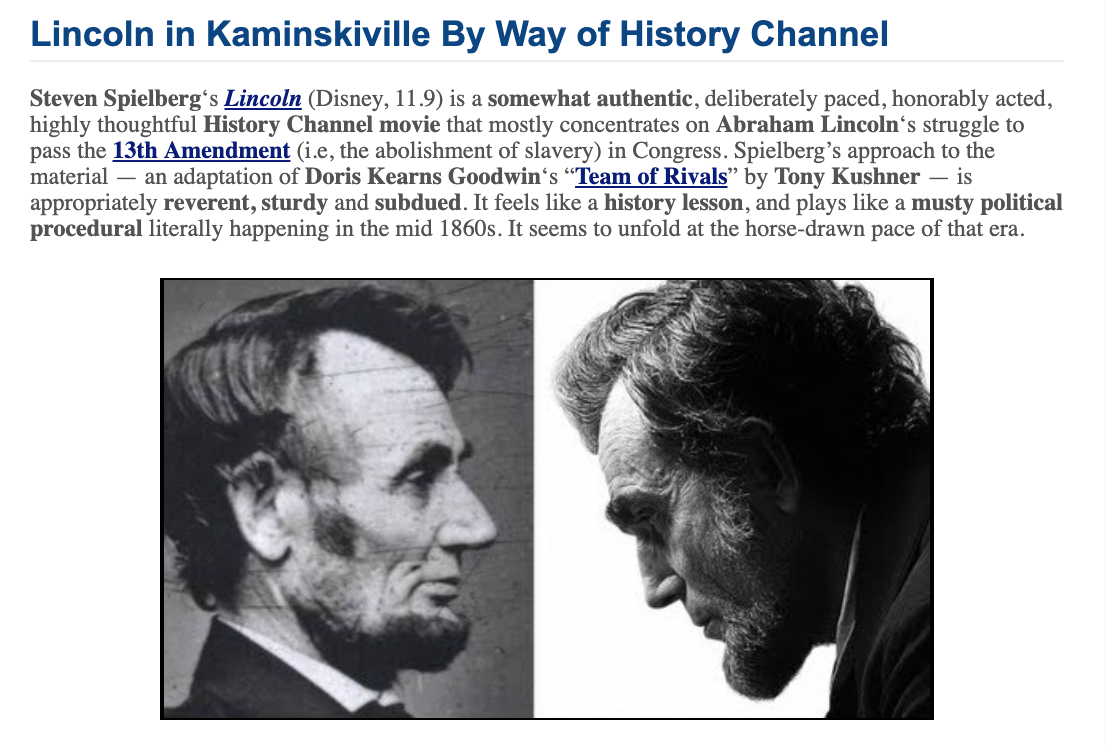