The terrible envelopment of intractable dark fate, that horrible sensation of sinking into mud and unable to wade or climb out of it…this is how “The Iowa Circus“, Matt Taibbi‘s 7.26 Rolling Stone article about the Democratic contenders, makes you feel. It’s so disheartening, so depressing…it’s actually fucking awful: 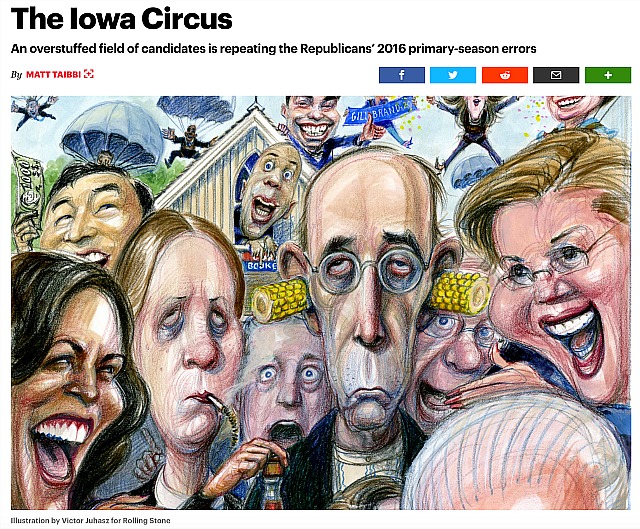 “Imagine how it looks to Republicans. If that’s too difficult or unpalatable, just look at the swarm of 24 Democratic candidates in high school terms.

“The front-runner — the front-runner! — is septuagenarian gaffe machine Joe Biden, who started running for president in the eighties and never finished higher than ‘candidacy withdrawn,’ with a career delegate total matching John Blutarsky’s grade-point average, i.e., zero point zero. The summer’s ‘momentum’ challenger is California Sen. Kamala Harris, who spent all year sinking in polls but surged when she hit Biden with ‘I don’t think you’re a racist but…” on national TV.

“A third contender is Sen. Elizabeth Warren, a famed red-state punchline who already has 10,000 Pocahontas tweets aimed at her head should she make it to the general. Her ‘I have a plan for that’ argument for smarter government makes her a modern analog to Mike Dukakis — another Massachusetts charisma machine whose ill-fated presidential run earned him a portrait alongside the Hindenburg in a Naked Gun movie.

“A fourth challenger, Bernie Sanders, is a self-proclaimed socialist born before the Pearl Harbor attack who’s somehow more hated by the national media than Trump. A fifth, Pete Buttigieg, mayor of South Bend, Indiana, has never earned more than 8,515 votes in any election. The claim to fame of a sixth, Beto O’Rourke, is that he lost a Senate bid to the world’s most-hated Republican. It goes on.

“The top Democrats’ best arguments for office are that they are not each other. Harris is rising in part because she’s not Biden; Warren, because she isn’t Bernie. Bernie’s best argument is the disfavor of the hated Democratic establishment. The Democratic establishment chose Biden because he was the Plan B last time and the party apparently hasn’t come up with anything better since. Nothing says ‘we’re out of ideas’ quite like pulling a pushing-eighty ex-vice president off the bench to lead the most important race in the party’s history.”

“The GOP error [during the 2016 primaries] was epic in scale. The Republicans sent twice the usual number of suspects into the buzz saw of a Throw the Bums Out movement they never understood, creating the comic pretext for the Clown Car: twice the canned quips, twice the empty promises, double the rage, frustration, and eye rolls.

“Nobody will want to hear this, but Democrats are repeating the error. The sense of dejà vu is palpable. It might and should still work out, according to the polls. But a double catastrophe seems a lot less impossible than it did even a year ago.

“Lose to Donald Trump once, shame on the voters. Lose to him twice? It’s glue-factory time for the Democratic Party, and another black eye for America, which is fast turning its electoral system into a slapstick reality show.”