16 months ago I posted about Richard Franklin‘s Link (’86), which is hands down one of my all-time favorite monkey movies. I’m re-posting because I somehow missed the fact that the Kino Bluray came out a month and half ago. I’ve just ordered it. A “4K restoration” with audio commentary by film historian Lee Gambin and film critic Jarret Gahan, deleted workprint scenes, an audio interview with director Richard Franklin.

3.18.18: Nobody remembers Richard Franklin‘s Link (’86), but it was a witty, better-than-decent genre thriller with a nice sense of tongue-in-cheek humor, and shot with a great deal of discipline. Clever, dry, smarthouse. And nobody saw it. 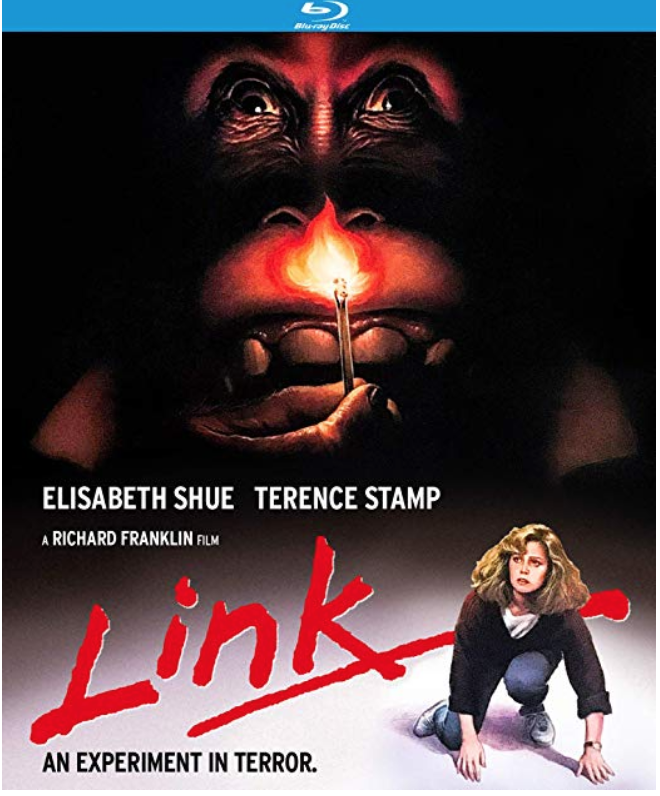 Shot in Scotland in ’85, Link was basically about a watchful, intelligent and increasingly dangerous chimpanzee who develops a sexual obsession for a junior zoologist played by young Elizabeth Shue (who was 22 or 23 during filming).

A Thorn EMI production that was acquired by Cannon, Link costarred Terrence Stamp, was fairly well written by Everett De Roche, and was very carefully composed. Franklin (who died young in ’07) shot it with a kind of Alfred Hitchcockian style and language.

I wrote the Cannon press notes and in so doing interviewed Franklin. The then-39-year-old director worked very hard, he told me, to put Link together just so. Franklin made no secret of the fact that he was a lifelong Hitchcock devotee.

Boilerplate: “Jane, an American zoology student, takes a summer job at the lonely cliff-top home of a professor who is exploring the link between man and ape. Soon after her arrival he vanishes, leaving her to care for his three chimps: Voodoo, a savage female; the affectionate, child-like Imp; and Link, a circus ape trained as the perfect servant and companion.

“A disturbing role reversal takes place in the relationship between master and servant and Jane becomes a prisoner in a simian house of horror. In her attempts to escape she’s up against an adversary with several times her physical strength, and the instincts of a bloodthirsty killer.”

I helped out with Link screenings at Cannon headquarters on San Vicente Blvd., and I remember playing The Kinks “Ape Man” (a portion of which is heard in the film) as a kind of overture for invited guests.

Terrence Stamp, who starred in Link, told me during a Limey interview in ’99 that Franklin was very tough on film crews.

A Horrorpedia page reports that Franklin “optioned a short outline which he described as ‘a sort of Jaws with chimps.’ He didn’t do anything with it until Everett de Roche showed him a National Geographic article by Jane Goodall about violence among chimpanzees.

“The English setting to me was essential,” Franklin said. “I wanted to contrast the primitivism of jungle animals with Old World values, high culture and ‘civilization’.”

From a 4.245.87 N.Y. Times review: “The script may be taken as a wry comment on romantics who attribute superior qualities to all animals except the human sort. In the second half, when Link settles into an old-fashioned maiden-monster movie, Mr. Franklin accelerates the action, turning up the tension degree by devious degree. Before you know it, everybody is missing but Link. Mike Malloy‘s camera abets by offering, at appropriate moments, an ape’s-eye view of the world.”

Posted a decade ago on Amazon by Trevor Willsmer:

“There are just a few rules that you have to remember: One, You’re the dominant species. You must never, ever treat them as equals. Two, don’t ever let anything escalate. Always forgive them, whatever they do. Three, don’t get involved in their squabbles. They sort them out. And four, some turds in the hall. Can you clear them up?”

“Barely remembered today, Link is one of those films that just got lost in the cracks. But any ape movie with a heroine called Jane (after Jane Goodall, not Tarzan’s mate) that uses both The Kinks ‘Apeman’ and Marlene Dietrich‘s entrance in a gorilla suit from Blonde Venus as well as offering an infectiously demented Jerry Goldsmith baroque ‘n’ roll score mixing synths, symphony orchestra, calliope and a 7/8 drumbeat definitely deserves a second look.”