When We Was Fab

From Paul Schrader’s Facebook: “This signed photo (I believe it’s from the Harry Ransom archives) captures a moment in male Hollywood identity. Marty and I (counter-culturalists to the core) appear at a New Years Eve party [12.31.73] at Michael and Julia Phillips’ Malibu house in three-piece suits. All our friends are hippies, yet here we are. We wanted to be grownups. Our cultural DNA. What filmmaker today wants to be a grownup? Why am I so much taller? [Because] I’m wearing platform shoes. Those were the times.”

Mean Streets had opened a couple of months earlier. Scorsese was beginning work on Alice Doesn’t Live Here Any More, which shot in the late winter or early spring of ’74 and opened on 12.9.74. Schrader and his brother Leonard would soon begin work on The Yakuza. Their script sold for $325,000. I’ve forgotten when Schrader wrote Taxi Driver, but it was during a down-and-out period (Schrader had broken up with a girlfriend, had been living in his car) and sometime before this photo was taken. I think. I need to bone up. 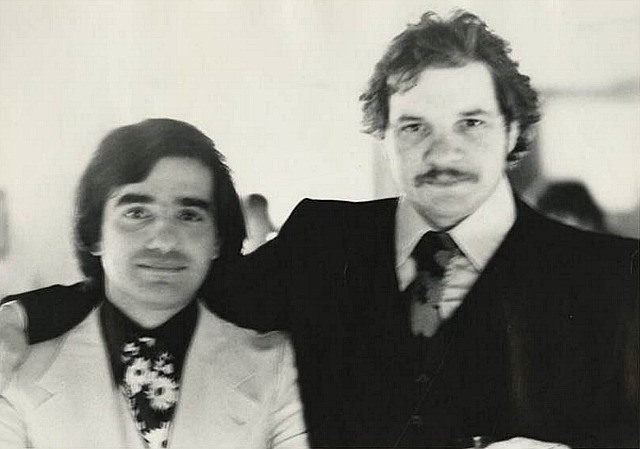