Dregs of the Gene Pool

I saw Oliver Stone‘s Natural Born Killers three or four times in the late summer of ’94, but that was because it had been originally written by Quentin Tarantino (here’s a draft of it) and I was chasing the Tarantino glamorama. Reservoir Dogs (which I’d seen at the 1992 Cannes Film Festival) and True Romance were part of the recent backlog. Pulp Fiction had premiered in Cannes in May of ’94 but wouldn’t open until October, and I was getting to know producers Don Murphy and Jane Hamsher at the time. It was all kind of swirling together.

Stone‘s lightning-hot streak of the mid to late ’80s — Platoon, Salvador, Wall Street, Talk Radio and Born on the Fourth of July — had given way to a respectable if slightly less incandescent run of ’90s films — The Doors, JFK, Heaven and Earth, Killers, Nixon, U-Turn, Any Given Sunday — but his Bill Clinton-era output certainly demanded everyone’s attention. If you ask me Sunday is the one of the greatest football films ever made.

But honestly? I always quietly hated Natural Born Killers. I didn’t see it as a tongue-in-cheek media satire but as a scurvy, low-rent, multi-media death flick — a blood-and-splatter show. Right now I can’t think of another film I’d rather re-watch less. Let me say clear and straight that I will never, ever sit through this ugly-ass film again .

For some reason Variety‘s Owen Gleiberman wrote about NBK yesterday, but my recollections of the nihilism of this quarter-century-old film — just the recollections! — is enough to make me throw up.

From Gleiberman’s Movie Freak: “The tingly audacity of Natural Born Killers, and the addictive pleasure of watching it, begins with the perception that Mickey and Mallory experience not just their infamy but every moment of their lives as pop culture. Their lives are poured through the images they carry around in their heads. The two of them enact a heightened version of a world in which identity is increasingly becoming a murky, bundled fusion of true life and media fantasy. It works something like this: You are what you watch, which is what you want to be, which is what you think you are, which is what you really can be (yes, you can!), as long as you believe.”

From the Variety article: “What form does this kind of belief take? It’s a word that applies, in equal measure, to the fan-geek hordes at Comic-Con; to the gun geeks who imagine themselves part of a larger ‘militia’; to the gamers and the dark-web conspiracy junkies; to the people who think that Donald Trump was qualified to be president because he pretended to be an imperious executive on TV. It applies to anyone who experiences the news as the world’s greatest reality show, or to the way that social media is called social media because it’s about people treating every facet of their lives as ‘media’ — as a verité performance.

“Made just before the rise of the Internet, Natural Born Killers captured, and predicted, a society that turns reality itself into a nonstop channel surf, a simulacrum of the life we’re living. One of the film’s most brilliant sequences is a dystopian sitcom, with a vile fulminating Rodney Dangerfield, that depicts Mallory’s hellish home. It’s a dysfunctional nightmare reduced to TV, which is what allows Mallory to murder her way out of it.” 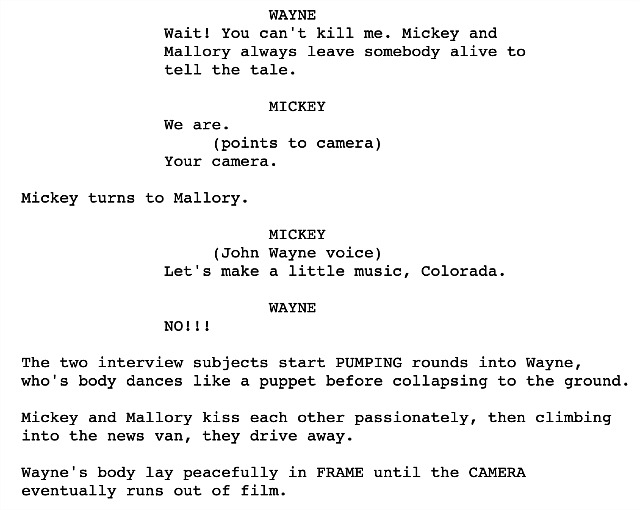