From HE correspondent Mark Smith: “The second season of Mindhunter is about utilizing the new FBI science: can the psychological profiles of the incarcerated serial killers that Holden and Bill have so far gathered be used to catch a killer who’s still active? Is all this interviewing and traveling and sharing pizza with Ed Kemper worth a shit? This question is not only relevant to the Atlanta Child Murders, but to Bill Tench‘s creepy future-killer adopted son.

“One of the common traits of a serial killer (confirmed by Ed Kemper) is that he’s compelled to return to the scene of the crime, especially if there’s a chance to see the killer’s nefarious deeds being inspected by police and/or civilians. It gives his ego a jolt, fuels the narcissism.

“In episode 6, about 31 minutes in, we see the Atlanta police chief and Holden on the side of the road where a massive search is taking place for new bodies. A group of reporters/photographers chases down the chief. When he gets into his car, the reporters turn and see Holden walking away, the giant yellow letters FBI leaping off his windbreaker. The throng chases him down. He calmly gets into his car and shuts the door. 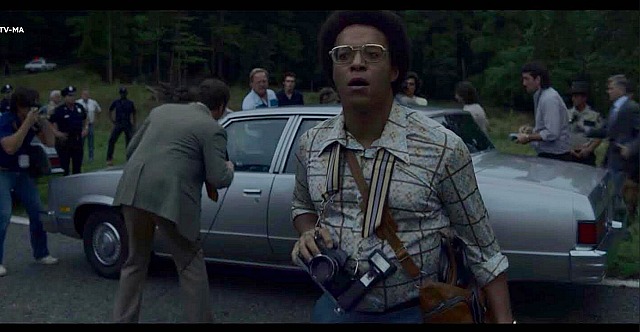 “And then something weird happens…

At the very end of the shot Holden’s car is surrounded by reporters and photographers, and one of them suddenly spins toward the camera, right in the foreground. He’s got a camera around his neck. He looks around and runs out of frame, as if trying to find another bit of the action to focus on, scanning the area for a Pulitzer-prize winning snapshot. It happens fast and is made to feel random, like another part of the chaos.

“But anyone who’s watched Mindhunter knows that it’s extremely deliberate: the shot selection, the editing, the camera movements, the acting. No one is Method Acting here, no one is holding court: you say your lines with clarity and honesty, and please shit-can the histrionics. Camera movements are usually slow and deliberate, if they occur at all. And the action is staged with almost robotic precision.

“So when a guy in the foreground spins toward the camera and rips the viewer’s attention away, you can bet it’s deliberate.

“I’m not saying I jumped from my chair and screamed, “That was the killer…that was Wayne Williams!” but the moment stuck with me.

“It felt odd, out of place, a red flag, a mental coupon to be tucked away and cashed in later.

“And then when they showed Wayne Williams after they pulled him over on the bridge (50 minutes into episode 8), that’s when I jumped out of my seat in triumph.” 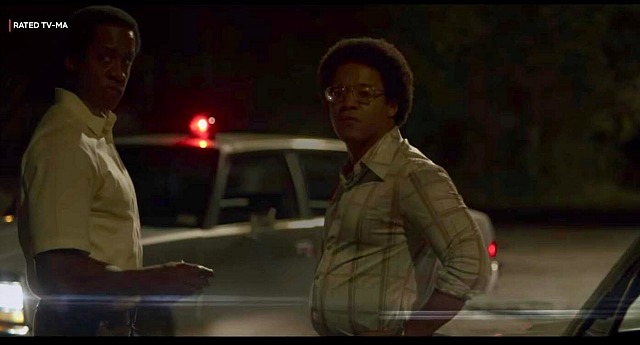