I prefer to sidestep the biological reality of Ryan O’Neal being 78, and to think of him as the guy he was in the early to mid ’70s, when things were as good as they would ever get for him.

I had two minor run-ins with O’Neal in the ’80s. The first was after an evening screening of the re-issued Rear Window** at West L.A.’s Picwood theatre (corner of Pico and Westwood) in late ’83. As the crowd spilled onto Pico O’Neal and his date (probably Farrah Fawcett) were walking right behind me, and I heard O’Neal say “that was sooo good!” Being a huge Alfred Hitchcock fan, this sparked a feeling of kinship.

Four years later I was a Cannon publicity guy and charged with writing the press kit for Norman Mailer‘s Tough Guys Don’t Dance, which didn’t turn out so well. I for one liked Mailer’s perverse sense of humor.

I did an hour-long phoner with O’Neal, and my opening remark was that he was becoming a really interesting actor now that he was in his mid 40s with creased features. He was too good looking when younger, I meant, and so his being 46 added character and gravitas. O’Neal was skeptical of my assessment but went along — what the hell.

In fact O’Neal’s career had been declining for a good five or six years at that point. He knew it, I knew it — we were doing a press-kit-interview dance because there was nothing else to say or do.

O’Neal’s last hit film had been Howard Zeiff and Gail Parent‘s The Main Event (’79), which critics panned but was popular with audiences. He had starred in four mezzo-mezzos before that — Peter Bogdanovich‘s Nickelodeon (’76), Richard Attenbrough‘s A Bridge Too Far (’77), Walter Hill‘s The Driver (’78) and John Korty‘s Oliver’s Story.

Consider this HE anecdote about some 41-year-old graffiti on an Oliver’s Story poster.

O’Neal’s career peak lasted for five years (’70 to ’75) and was fortified by a mere four films — Arthur Hiller‘s Love Story (’70), Bogdanovich’s What’s Up Doc? (’72) and Paper Moon (’73), and Stanley Kubrick‘s Barry Lyndon (’75). (The Wild Rovers and The Thief Who Came to Dinner, which O’Neal also made in the early ’70s, were regarded as mostly negligible and therefore didn’t count.)

O’Neal has said for decades that his career never really recovered from Barry Lyndon — Kubrick had changed the film entirely in editing, and had made him look like a clueless and opportunistic Shallow Hal of the 18th Century. Plus the film had lost money.

In ’92 I wrote an exhaustively researched Movieline article called “Ten Interviews That Shook Hollywood.” One was a September 1973 Esquire profile of O’Neal by Tom Burke, called “The Sheik of Malibu.” O’Neal hated the piece. I can understand his perspective, but Burke did a good job of capturing the Malibu sun-and-sand vibe that was at least partly defining O’Neal at the time. Here’s my summary: 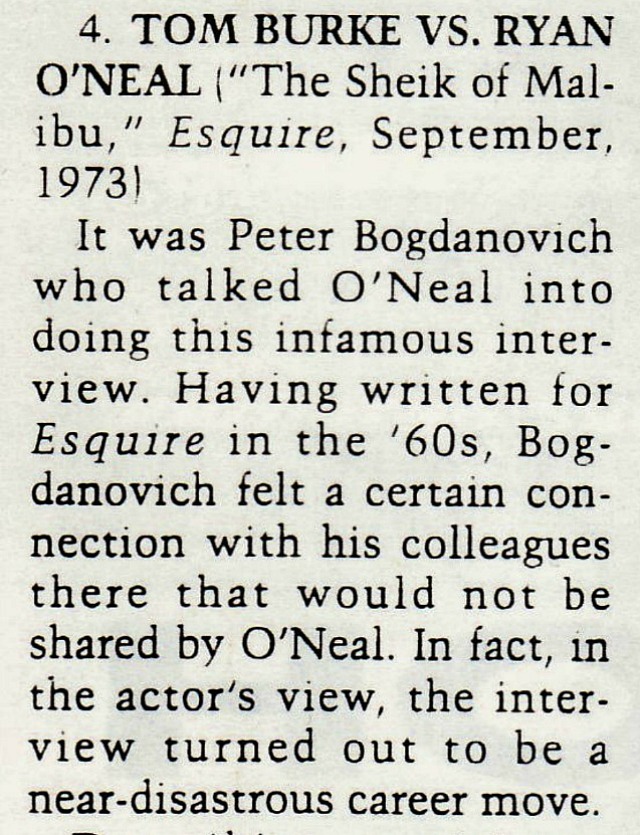 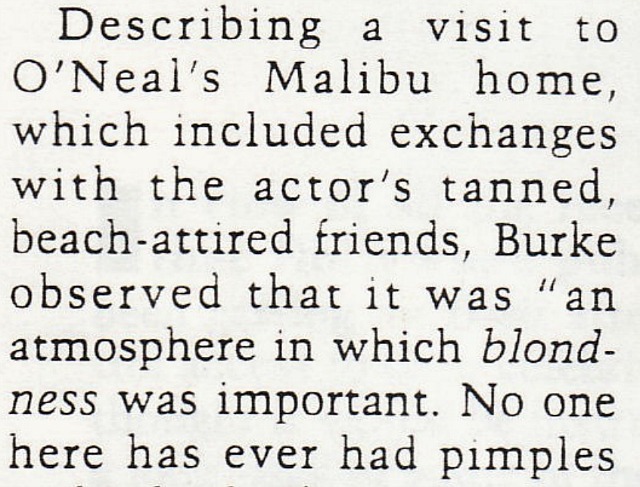 ** Rear Window was properly restored by Robert Harris in 2000.