…was his name. He was born Edward Joseph Mahoney. I don’t know who thought up his marquee name, but it was pure genius. Upon entering public consciousness in ’77, “Eddie Money” perfectly expressed the transition from the last remnants of hippie-ish, pot-and-hashish spiritualism (which had ignited in the mid ’60s and was choking and sputtering by ’76) to the cocaine-fortified, disco-frequenting, coming-of-Reagan narcissism that began to take over. To me Eddie Money was Studio 54, glitter, sexual indulgence, nose candy, etc. Except I couldn’t afford nose candy back then. I couldn’t afford a lot of things. But Eddie could.

The current woke hoo-hah is over comedian Shane Gillis‘s coarse use of “racist, sexist, homophobic remarks”, per a 9.12 Variety story by Will Thorne and Elaine Low. The furor started with a resurfacing of an anti-Asian remark from Matt and Shane’s Secret Podcast. (I can’t find a link to the offensive podcast in question.) In the video, Gillis is heard saying “Chinatown’s fucking nuts…let the fucking chinks live there.”

“I’m happy to apologize to anyone who’s actually offended by anything I’ve said,” Gillis said in a statement. “My intention is never to hurt anyone but I am trying to be the best comedian I can be and sometimes that requires risks.”

Update: The Gillis scandal has instantly vanished in the wake of a shocking revelation that director Martin Scorsese willfully and maliciously used the term “chinks” in a scene in Mean Streets (’73). In an early discussion between Harvey Keitel and Robert De Niro‘s characters over a debt, De Niro complains to Keitel that “you’re leavin’ me with nothin’…we gotta go eat chinks?”

In the early ’70s the term “eat chinks” was a callous and insensitive urban phrase that meant “eating inexpensive Chinese food.”

Shocking as it may seem, Scorsese also had characters use the n-word in both Mean Streets and Taxi Driver (’76).

Gillis definitely used terms and phrases that any reasonable person would identify as hurtful and insensitive.

Should it matter one way or the other that Scorsese’s use of callous racial terminology happened over 40 years ago? A racist is a racist is a racist, no? How should Scorsese and for that matter De Niro be punished? Should they be forced to wear needle-sharp cactus sandals during promotional appearances for The Irishman?

Industry guy: “The real time and one-continuous-take thing is cool and all, but I hear 1917 is more of a commercial play than an awards thing. Children of Men is incredible, but that wasn’t an awards thing either. Even Dunkirk, which mounted a big below-the-line Oscar campaign, as 1917 could also be doing, didn’t win the big one, nor did Nolan pose a serious threat that year for the Best Director prize.”

HE to Industry Guy: “WHAT? Universal is going to promote the hell out of this as a Best Picture candidate. Movies shot in real time constitute a very proud tradition, going all the way back to High Noon and The Set-Up and on through Linklater’s Before Sunset and Greengrass’s United 93. On top of which 1917 delivers ‘shot in real time’ AND captured in one continuous shot a la Birdman…are you effing kidding me?”

“Children of Men was the best film of 2006, and eff the Academy slackers who didn’t or couldn’t recognize that for lack of brain cells. Dunkirk was blazing drop-dead brilliant. People are idiots. They voted for The Fucking Artist in 2011…empty Coke bottles, no hope.”

Industry Guy: “Universal is going to push it, of course, but is that the kind of movie that typically wins, Birdman notwithstanding? It feels gimmicky. It’ll all depend on the emotion of the story. Agreed on Children of Men. but just because something is the best, doesn’t mean the Academy will recognize it as such. are YOU fucking kidding ME? Dunkirk was very good, but hardly a masterpiece. Mendes is a warmer filmmaker than Nolan — I’ll grant you that. American Beauty has heart, ditto Road to Perdition.”

Do the sage executives at Sony marketing finally understand how inevitable it is that Brad Pitt will take the Best Supporting Actor Oscar early next year? And how pointless it is to push A Beautiful Day in the Neighborhood‘s Tom Hanks in the same category? Surely this is sinking in.

Filed at 12:41 pm by Variety‘s Gene Maddaus: “Felicity Huffman was sentenced on Friday to 14 days in prison for the crime of paying $15,000 to boost her daughter’s SAT score. Judge Indira Talwani also ordered her to serve 250 hours of community service and a year of probation, and pay a $30,000 fine.

“’Trying to be a good mother doesn’t excuse this,’ Talwani said in issuing her verdict. ‘The outrage in this case is a system that is already so distorted by money and privilege in the first place…you took the step of having one more advantage to put your child ahead.’

“Huffman was ordered to report to prison on October 25.”

In order to prepare for the terrible trauma of serving a 14-day sentence, Huffman will submit to a special program of psychological boosting and positive-aura counselling. She’ll also take a crash course in defensive martial arts techniques in order to protect herself from vicious inmates. She’ll also watch several 1930s prison dramas starring James Cagney, George Raft, Humphrey Bogart and Spencer Tracy; she’ll also watch several babes-behind-bars exploitation films, including Jonathan Demme‘s Caged Heat. She’s also exploring writing a book about the ghastly horror of a two-week jail term. Her publisher has already inquired about promotional appearances on The View and The Ellen Show, and a possible endorsement by Oprah Winfrey’s Book Club.

Robert Mitchum to Felicity Huffman: “The prosecutors originally wanted you behind bars for two or three months, right? And then they dropped their recommendation to 30 days, and yet somehow your lawyer persuaded the judge to give you 14 days. And you’re crying? Back in ’48 I did 60 days in county for smoking a joint, and I did the time like water off a duck’s ass. Hell, I could’ve done 14 days while doing yoga handstands. I know that was 70 years ago and that admonitions like ‘be a man’ don’t fit into the 21st Century sensibility, but the more you just chill and take your medicine, the better you’ll look in the long run.”

Even though the teaser suggests otherwise, it’s generally understood that Sam Mendes‘ 1917 (Universal 12.25) will be presented in a single unbroken take a la Birdman. But until this morning, I didn’t realize that the film will also occur in “real time” — the running time corresponding more or less precisely to the time span of the depicted action.

I realized this when a friend sent me a 4.26.18 PDF draft of the script, co-written by Menzes and Krysty Wilson-Cairns, and I saw the following on page 3:

1917 is therefore joining a small fraternity of distinguished real-time films. Here’s a list of the best known, starting with the most highly regarded and working down. I’ve thrown in an estimate of the stopwatch accuracy of each:

1. Fred Zinneman‘s High Noon (’52) — The action doesn’t occur in actual, real-deal, stop-watch time, but it comes close. Will Kane and Amy Fowler’s marriage ceremony ends at around 10:35 am on a Sunday, and the telegram notifying Kane about the pardoning of Frank Miller is delivered at 10:40 am. The climactic shoot-out happens right after the arrival of the noon train, and by my calculations Kane throws his star into the dust about 12 minutes later. Add the opening-credits footage of the Miller gang meeting up and riding into town (roughly 140 seconds) and High Noon should last a minimum of 102 minutes, give or take. And yet it only runs 85 minutes.

2. Sidney Lumet‘s 12 Angry Men (’57) — The judge reads instructions to the jury sometime in the late afternoon, the jury retires to the deliberation room, and after some small talk and bathroom time they get down to business about 10 minutes later. They deliberate long enough for the sun to go down, for a rainstorm to hit and pass, for a discussion about ordering dinner, and for Jack Warden to miss out on his early-evening ball game. By my calculations this would take a minimum of two hours if not three, and yet the film runs 96 minutes.

3. Paul Greengrass‘s United 93 (’06) — In actuality the flight of United 93 from Newark Airport to Shanksville, Pennsylvania lasted 81 minutes — departure at 8:42 am, ground-slam at 10:03 am. The film lasts 110 minutes but that covers the hijackers saying early-morning prayers, the passengers waiting in the lounge and being seated, and the flight being delayed before takeoff. If you forget about the morning prayers the real-time count is fairly precise and on the money.

On 6.30.16, or just before the opening of Justin Lin and J.J. Abrams‘ Star Trek Beyond, I posted an imaginary chat between Abrams and Albert Brooks about who and what Lin really was. (The dialogue was mostly stolen from a scene between Brooks and Holly Hunter in Broadcast News.) I’m mentioning this because I’ve taken a fresh look at Lin’s track record since his brilliant 2002 break-out film, Better Luck Tomorrow, and over the course of 17 years he’s either directed or is set to direct seven (7) fast-car movies…seven! In other words, with one or two exceptions Lin has almost always gone for the high-octane, bucks-up jizz whizz. If I was harsh or mean-spirited I would conclude that such a fellow is spiritually lacking on some level, but I wouldn’t want to sound too on-the-nose. 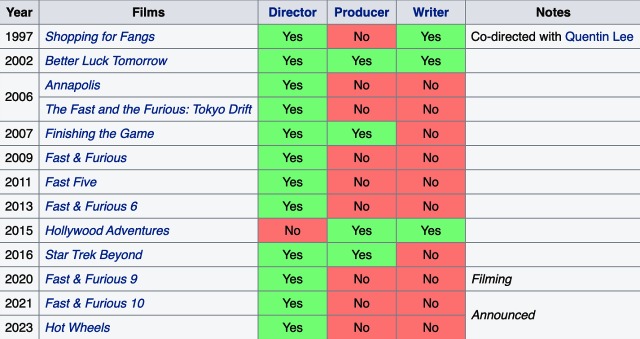