Marielle Heller‘s A Beautiful Day in the Neighborhood (Sony, 11.22) is all about the art and impulse (and to some extent the discipline) of being gentle and kind, however and whenever possible and even when it’s not. There’s no resisting the caressing vibe of this thing, and who would want to? It’s going to make a ton of money, and Tom Hanks‘ performance as the beloved Fred Rogers will snag a Best Supporting Actor nom. It’s not a brilliant film, but it’s an awfully nice one.

The gentle scheme is to present a mostly factual, real-life story — all about an evolving relationship that actually happened 21 years ago between a somewhat testy and suspicious writer and his serene-minded subject, and how it turned out for the better.

The glumhead was Esquire profiler Tom Junod (called “Lloyd Vogel” and portrayed by Matthew Rhys) and the subject was Rogers, the creator and host Mr. Rogers Neighborhood from 2.19.68 until 8.31.01.

The trick is that the film actually feels like — is — an episode of Mr. Rogers Neighborhood. It deals with angry adult workaholic stuff (i.e., mostly Vogel’s issues with his father, played by Chris Cooper) but adheres to the emotional tone and terms of this fanciful, tender-hearted kids show.

Hanks obviously owns this film, but it’s a little curious that Heller and screenwriters Micah Fitzerman-Blue and Noah Harpster decided to only portray the Fred Rogers of legend. I’m not saying Rogers was someone else deep down, but he’s so gently mannered and all. Did he ever swear or fart or snap at anyone…ever? And the film is soooo slowly paced and extra-double-triple gentle and quiet. There are sooo many close-ups and MCUs. So many actor-ish expressions of rage, surprise and buried anger on Rhys’ face. And that three-week beard…yeesh.

I don’t believe that the actual Tom Junod slugged his father during a wedding reception. Angry sons do this in movies; not so much in real life. Critic friend: “I think the slugging-the-father scene rings false even as a movie scene; but then, I think, A Beautiful Day recovers. There was a lot of criticism in Toronto about how the Matthew Rhys parts aren’t as strong as the Tom Hanks parts. I get that criticism, but what I think it misses is the way the whole film works together.”

In my spare time and in less than a year I could write a huge Taschen coffee-table book that would carefully dismiss and cancel 80% to 90% of the great American films of the last 100 years. For failing to satisfy present-tense woke criteria, I mean. For creating and promoting patriarchal white-man myths and legends. For endorsing and popularizing sexist content. For marginalizing of women, LGBTQs, Native Americans and characters of color. You name it, I can cancel it.

What classic studio-era films, seriously, would pass muster by today’s standards? Damn few. Every John Ford film except for The Grapes of Wrath and The Informer would be subject to reconsideration, at the very least. Gone With The Wind is already toast, of course, but The Searchers would be thrown on the bonfire also. Gunga Din would almost certainly be discredited for endorsing British colonialism. Would the films of Howard Hawks catch a break because of their strong, take-charge women characters? I would imagine. 1940s and ’50s social criticism films from 20th Century Fox during the heyday of Daryl F. Zanuck (’40s and ’50s) might escape condemnation. How would the Sidney Poitier films of the ’50s and ’60s fare? It would definitely be something to look into.

A proclamation from The Hollywood Reporter‘s Alexandra Cheney, posted on 9.24.19: “In an industry where social and professional clout are often defined by access to exclusive spaces, San Vicente Bungalows stands out as the membership club you definitely want to be a member of.”

If you’re approved (and don’t think this is any kind of duckwalk), it’ll cost you $1800 upfront and $4200 annually. But first you have to be nominated by a standing member, and then be approved by a nine-person membership committee, which meets twice monthly.

SVB member: “It doesn’t matter if you have money”…obviously bullshit. “It matters if you’re interesting.” Translation: If you’re dull or under-educated or given to a certain entitled arrogance you might have a tougher time of it.

Cheney: “Officially, what stands in your way are just three simple questions that make up the application to Jeff Klein‘s 10-month-old hotspot in West Hollywood: What would your autobiography be called? What is your favorite restaurant and why? What would your unique contribution to SVB be?”

(1) Title of HE’s autobiography: “Beware Those Who Live In A Crowd — They Are Nothing Alone.” Subtitle: “Avoid All Well-Dressed People Who Smile Strenuously — You’ll Live Longer.”

(2) HE’s favorite restaurant: Pier Luigi in Rome. Because it’s elegant and unpretentious and located in a smallish cobblestoned piazza, and because the food and service are always perfect.

(3) Unique HE contribution to SVB: Showing up for special film-related events but otherwise avoiding the premises like the plague. 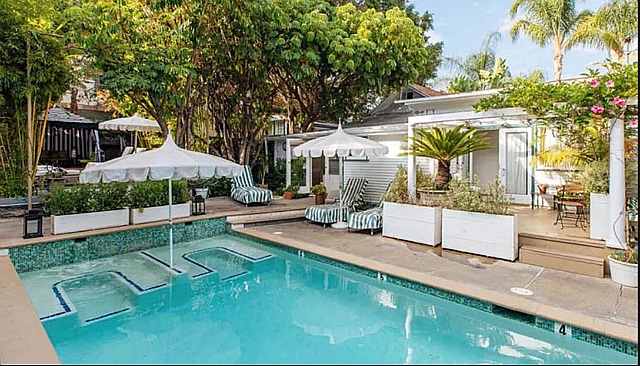 Posted yesterday in the comment thread for “Taika Watiti Players Present…,” and specifically in response to Jeff Sneider‘s claim that (a) “Jews like myself (and, obviously, a significant portion of the Academy) will feel comfortable laughing” at JoJo Rabbit, and that (b) “the movies that Wells thinks could win the Best Picture Oscar, like the Tarantino and the Scorsese, aren’t nearly as strong as he thinks.”

The curtain finally comes up on Martin Scorsese‘s The Irishman on Friday morning 9.27), followed by the L.A. premiere of Todd Phillips‘ Joker on Saturday evening. Quite the double-header.

Message to those who’ve groaned about The Irishman‘s 209-minute running time: This is a movie about a man’s life, comprising some 60 years and covering a lot of bad business all through the ’50s, ’60s, ’70s, etc. The decisions, events, history and the weight of same. How could this film be short or compact?

This morning a journo pally confided concerns about the de-aging CG and whether it’ll pass muster or prove distracting. My reply, more or less, was that all movies are unreal in this or that way. They all lay out their basic schemes and requirements, and you either buy into them or you don’t. Some movies feature actors with ornate makeup or wigs or moustaches. Black-and-white movies aren’t “real”, but no one’s ever called this a hurdle. Movies always pretend but we often buy what they’re selling regardless. The Irishman is no different.

In the comment thread for yesterday’s McCartney Colbert riff, a guy named “Silver” mentioned an amazing ending for Danny Boyle and Richard Curtis‘s Yesterday — one that would have blown 100 million minds and restored Boyle’s reputation to where it was around the time time of Trainspotting, Shallow Grave and 28 Days Later It goes without saying that this kind of ending is so far beyond where Curtis, a softball peddler of romantic formulas, lives and creates that it could never happen with Curtis’ involvement, but imagine the seismic impact!

HE alternative. Intrigued by Jack Malik’s visit to his beach house, the 78 year-old John Lennon (Robert Carlyle) attends one of Malik’s concerts. Lennon wanders backstage after the show to offer congratulations, and joins a throng waiting for selfies and autographs. Standing next to Lennon is the alternative-universe Mark David Chapman, who’s packing heat and looking to shoot Malik. Why? Because Chapman, like that older hippie couple Malik has spoken to in Act Two, knows all about Malik’s Beatle scam and is looking to punish him for being a fraud. The quicksilver Lennon notices that Chapman is beset by dark vibes, and leaps into action when Chapman pulls out his snub-nose .38. Lennon karate-chops Chapman in his Adam’s Apple and takes his gun. Malik is spared.

Alternate ending #2: Lennon tackles Chapman before he can shoot Malik, but is accidentally shot himself as they struggle on the floor. The horrified Malik cries out “somebody call 911!” and holds Lennon’s head in his lap as the elderly Liverpudlian slowly dies from his wounds.

Alternate ending #3: Malik is shot by Chapman but the assassin is quickly subdued by Lennon and other fans, and is arrested. Lennon kneels next to the wounded Malik, holding his hand and offering words of love and compassion as Malik draws his last few breaths.

You can laugh and make fun of these, but you know they’d play better than the bullshit ending that Boyle and Curtis went with.