Trust me — whenever a headline asks “can a certain film win awards?,” the implication is that it may not.

I for one am inclined to be suspicious, especially considering that a trusted HE confidante is calling Just Mercy “very conventional” with “two cringe-worthy courtroom speeches.” And yet “watchable as far as it goes, solid performances throughout.” In other words, pretty good but no Cuban cigar. 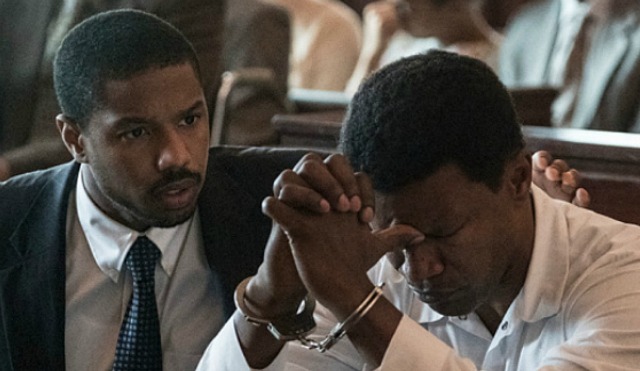 The award-touted pic played last night “through the roof” at Toronto’s Roy Thomson Hall, Feinberg reports, “thanks largely to a powerful story strongly brought to life,” etc. Michael B. Jordan portrays real-life lawyer and activist Bryan Stevenson and Jamie Foxx is Walter McMillian, a wrongly convicted murderer whose sentence is turned around over the course of the film.

But hold your horses, Feinberg is also saying. Wait just a damn minute. Don’t get your knickers into too much of a twist.

“The reality is that Just Mercy is a somewhat glossy, on-the-nose, big-studio film, and is not nearly as polished or impressive as Cretton’s Short Term 12, which introduced Brie Larson and a host of other terrific young talent to cinephiles. But it will get a much better release [than Short Term 12], and will similarly appeal to audience emotions, which is why it cannot be counted out.”

Correct me if I’m wrong, but Feinberg seems to be implying that Just Mercy will engage emotions by way of virtue signalling — i,.e., drawing from the old Call Northside 777 playbook but with a strong ethnic-confrontation component (i.e., a brilliant, soft-spoken black attorney carefully disputing racist assumptions and attitudes voiced by Alabama crackers).

Feinberg: “At the end of the day, the best awards bets for Just Mercy are probably two supporting actors who make the most of a number of big moments to shine in the 137-minute film: Foxx and, as another inmate sentenced to death row, Rob Morgan (who was even better this year in Joe Talbot‘s The Last Black Man in San Francisco).

“Jordan is very good, as always, but this time in a part that is probably too understated and noble to emerge from a crowded field of best actor contenders.”

Shorter Feinberg: Foxx will be nominated for Best Supporting Actor, but don’t count on too much else.

Contrasting opinion from Deadline‘s Pete Hammond: “The Toronto first night audience handed Just Mercy unusually strong applause (especially considering there was no Q&A or spotlight on the filmmakers during the end credits) after its first screening at the Roy Thompson Hall, and then multiple standing ovations at the Elgin for its second screening and q & a.

“One executive from a rival studio told me earlier Friday, hours before the premiere, that they heard it could be ‘this year’s Green Book.’ Time will tell on that, but in terms of a reception, it certainly seemed to match the enthusiasm for 2018’s Best Picture Oscar winner, and definitely will find a place in the race for this year.”