The Venice Film Festival’s Golden Lion trophy has been won by Todd Phillips‘ Joker, and the Grand Jury Prize has been handed to Roman Polanski‘s An Officer and a Spy.

Joker star Joaquin Phoenix was already considered a likely contender (if not an apparent lock) for a Best Actor Oscar nomination, but now he’s entering award season with an even stronger brief.

The Polanski win is a fairly serious shocker considering that (a) An Officer and a Spy has managed only a 56% positive rating from Rotten Tomatoes and Metacritic, and (b) the fact that Venice Film Festival jury president Lucretia Martel expressed reservations about Polanski’s history just before the festival began, adding that she didn’t want to attend an opening-night event in his film’s honor. 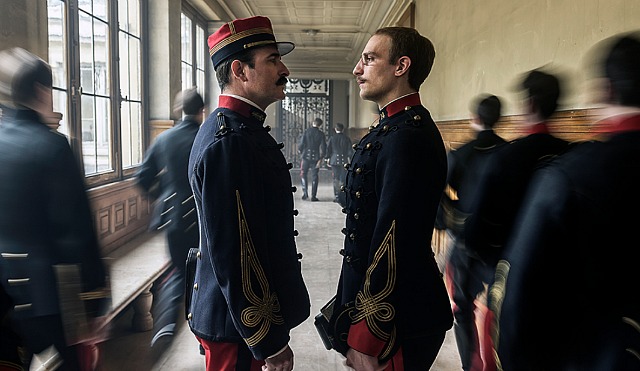 Martel’s remarks prompted a demand for an apology from one of Polanski’s producers, which Martel subsequently offered.

During the opening press conference Martel said, ”I do not divide the artists from their works of art. I think that important aspects about the work of art emerge from the man. I also think that, for all of you, the presence of Polanski with what we know about him in the past is somehow difficult to face.”

Excepts from Glenn Kenny’s review of the Polanski film:

“The film itself is fantastic.

“An Officer and a Spy takes the perspective of officer Georges Picquart (Jean Dujardin), who looked on while Dreyfus was condemned and then, after taking over a section of the Army’s intelligence division, learned how egregiously Dreyfus had been framed.

“The twist here is that Picquart was personally anti-Semitic, and personally disliked Dreyfus for that reason. In the movie’s opening scenes, when Picquart reports to his superiors about watching Dreyfus stripped of the buttons on his uniform as part of his sentences’ ‘degradation,’ he says it was like the Army was being stripped of ‘a pestilence.’

“But Picquart is, outside of [this] grotesque prejudice, a man of honor, a believer in the truth. Once he discovers it he won’t back down. It will mean ruin to him in many respects.

Polanski “[handles] a suspense narrative with Hitchcockian discipline and style. The proceedings are enlivened by a superb cast; aside from the superb Dujardin, there’s a very low key Louis Garrel as Dreyfus, Emmanuelle Seigner as Picquart’s married mistress, Mathieu Amalric as a frazzled handwriting expert, and more. The fellows playing corrupt French generals look like they could have stepped out of Kubrick’s Paths of Glory.

“When he’s really on his game, as he is here, Polanski can be said to be the final arbiter of how to compose a film frame, how to choreograph what moves within it, how to move the frame itself, when to go to another shot. In addition to that, An Officer and a Spy has something very real and urgent to say about the world we live in today.

“It’s kind of a shame you’ll probably never get to see it.”

In other words, no matter how well-made or commendable the Polanski film may be, the #MeToo wokesters won’t allow it to be seen stateside.