Regarding Moronic Academy Concerns About “Irishman”

Scott Feinberg has posted a 9.28 Hollywood Reporter assessment of The Irishman‘s chances of landing a Best Picture Oscar as well as other honors. Feinberg is correct in saying that the chances are excellent, but he also mentions four uh-oh factors as far as your generically older, less-than-fully-engaged, “we’re from Missouri” Academy members are concerned.

Here they are with HE replies following each:

Feinberg uh-oh factor #1: “As the awards season progresses, The Irishman will face a number of challenges. For one thing, its runtime could deter some from even checking it out.”

HE reply: Any Academy member who avoids catching The Irishman because it runs 209 minutes needs to turn in his/her membership card…period. Because you have no sense of professional respect for your fellow craftspersons, and no sense of solemn spiritual devotion to the cinematic arts. If you can’t bring yourself to see what I believe is one of the greatest crime films ever and easily the best of the year so far, you need to resign and move to Fresno. It’s really that simple. 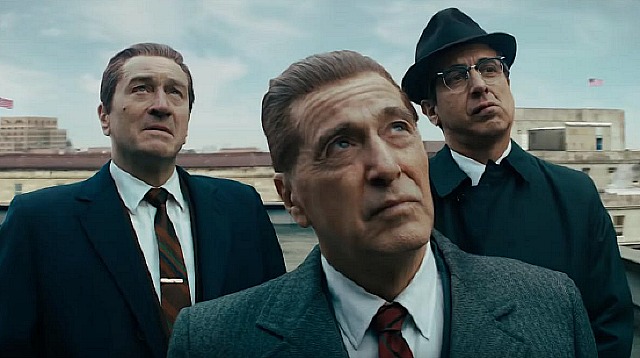 By the way: Unless you’re dying or paralyzed, you have to catch The Irishman in a theatre. You need to focus on it the way all the in-crowd, cool-cat critics and columnists did yesterday morning during our 10 am screening. It will be privately screened a lot during October and then for three weeks in theatres before streaming on Netflix. This is the way to go, not streaming. Or at least not initially.

Feinberg uh-oh factor #2: “[The Irishman] was financed (reportedly for $159 million) and will be distributed by Netflix, which remains a divisive company — although the streamer is giving this film a fairly substantial theatrical release (starting Nov. 1) before dropping it on the service in time for Thanksgiving.”

HE reply: Get over your Ma and Pa Kettle way of looking at the way the industry is right now, and stop demonizing Netflix for being in the forefront of the streaming revolution. Everybody’s doing it. Resistance is futile. Way of the world.

Feinberg uh-oh factor #3: “For yet another, the Academy has never really embraced crime movies [except] for Scorsese’s The Departed (’06), which some suspected at the time was his crime-genre swan song.”

HE reply: Anyone who comes out of The Irishman saying “yeah, that was just another crime movie, and why did it take so long for De Niro’s character to ice Jimmy Hoffa?”…anyone who emerges from The Irishman without realizing they’ve just seen a devastating personal statement from a veteran filmmaker who’s been at this racket for 50 years…a film about a man (De Niro’s Frank Sheeran or Scorsese himself) facing the end of life and the sum of his works, and what he’s done and become…anyone who says this is just a crime movie and therefore outside of the standard realm of Best Picture contention is a blithering idiot.

Feinberg uh-oh factor #4: “Anti-aging technology frightens many in the industry — especially actors, who comprise the largest branch of the Academy, and many of whom are concerned that they could be put out of work by technological advances.”

HE reply: Actors are afraid of CG technology that will make them look younger and better looking? A 77 year-old actor is pretty much restricted to playing old farts. But with de-aging technology this same actor could be cast as a 50something. How is that not a good thing? I’m not following Feinberg’s thinking here.