“We Are Your Life”

According to longtime Robert De Niro partner and Irishman producer Jane Rosenthal, Martin Scorsese‘s final gangster flick “is a slower movie. It doesn’t have the kind of intensity, the visual intensity, [of] a Casino or a Goodfellas. It is guys looking at themselves through an older perspective.”

It’s basically about “toxic masculinity” being the end-all and be-all of the life of mob hitman Frank Sheeran (Robert De Niro), Rosenthal says, “and what happens when someone chooses one family over their own nuclear family, and then tries to make repairs at the end of [his life]. What happens to men who make that decision.”

The Irishman will debut at the NY Film Festival on Friday, 9.27, or four days hence. 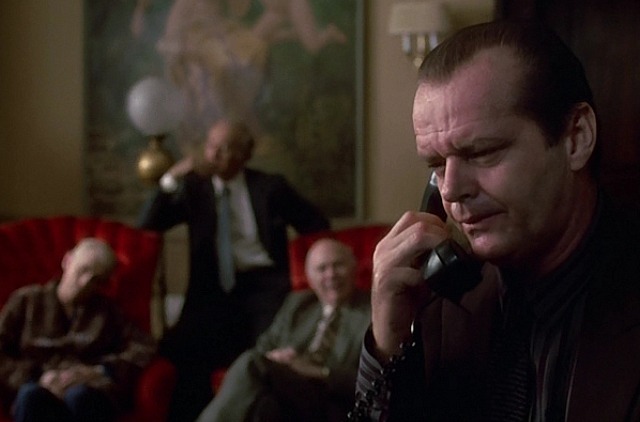 Can you imagine any old-time, bullshit-spewing producer in the Sam Spiegel or David O. Selznick or Harvey Weinstein mode calling one of his upcoming films “slower”? Rosenthal presumably means that The Irishman is sadder or more meditative, etc. But my God, in most people’s opinion “slower” is only a step or two removed from boring.

And the term “toxic masculinity”, of course, is straight out of your basic SJW feminist handbook.

Over the years most mobster types (including the ones in the first two Godfather films, Goodfellas and The Sopranos) have been portrayed as men who lived most completely in the company of their crime family paisans, and secondarily with their nuclear families, as a kind of fallback thing.

What was the final shot of The Godfather (’72) about, when Al Neri closed that door on Diane Keaton‘s Kay Adams? It was about Kay being shut out of the inner sanctum of Michael Corleone‘s gangster life, and realizing that she’ll always be kept in a restricted zone in which she’ll never really share or know what’s going on.

Remember the definitive line that Don Corrado Prizzi (William Hickey) says to Charlie Partanna (Jack Nicholson) in Prizzi’s Honor? They’re talking about unscrupulous hitwoman Irene Walker (Kathleen Turner), whom Charlie has recently married and loves deeply. The boss, however, wants her dead. When Charlie protests, he’s told that there’s no choice because the Prizzi family is everything. “She is your wife,” Don Corrado says, “but we are your life.”

How is this any different from what Rosenthal is talking about?