“What Have We Done?”

A ’60s rebellion allegory that brilliantly captures the rage and excitement of a revolution in poetic fantasy terms, If… begins as a relatively straightforward story of a few teenaged malcontents — Malcolm McDowell‘s Mick Travis being the ringleader — coping with the routine humiliations imposed upon students by the priggish staff of a military-minded British private school.

But this 1969 film (directed by Lindsay Anderson, and based on a script by David Sherwin and John Howlett) gradually becomes more and more surreal, and not just in a political vein.

That look of fierce concentrated rage in McDowell’s eyes as he and his friends fire their automatic weapons from a rooftop at their public-school enemies….that’s the whole ’60s up-against-the-wall mania in a nutshell. Stanley Kubrick hired McDowell to portray “Alex” in A Clockwork Orange because of how thoroughly he rocked as If…‘s romantic-anarchic hero.

Was If… the first mainstream commercial drama to mix color and black-and-white footage in an impressionist vein? Perhaps another film or two did it first, but no titles are coming to mind.

Posted on 7.8.07: In “Fear and Loathing in Las Vegas“, the late Hunter S. Thompson described the 1966 to ’67 era of cultural explosion-revolution as “the kind of peak that never comes again. San Francisco in the middle ’60s was a very special time and place to be a part of. Maybe it meant something, maybe not in the long run… but no explanation, no mix of words or music or memories can touch that sense of knowing that you were there and alive in that corner of time and the world.”

You can feel some of this as you watch Lindsay Anderson‘s If…. It’s a film that gets eighty or ninety things right (at least), and yet the finest of these is providing a distillation of mid ’60s rightness and holiness and inevitability. Precisely because it’s a metaphor piece and not a recreation of the times (i.e., it uses none of the music).

Except for the long hair and sideburns If… could be happening in the early ’50s or late ’70s or the ’80s, even. It’s about a repressive British school for boys, one that dispenses the old crisp disciplines and stiff-upper-lip values that fortified the British empire for two or three centuries, and about how a lot of this stuff just stopped flying in the early to mid ’60s. And how young people everywhere just knew this. 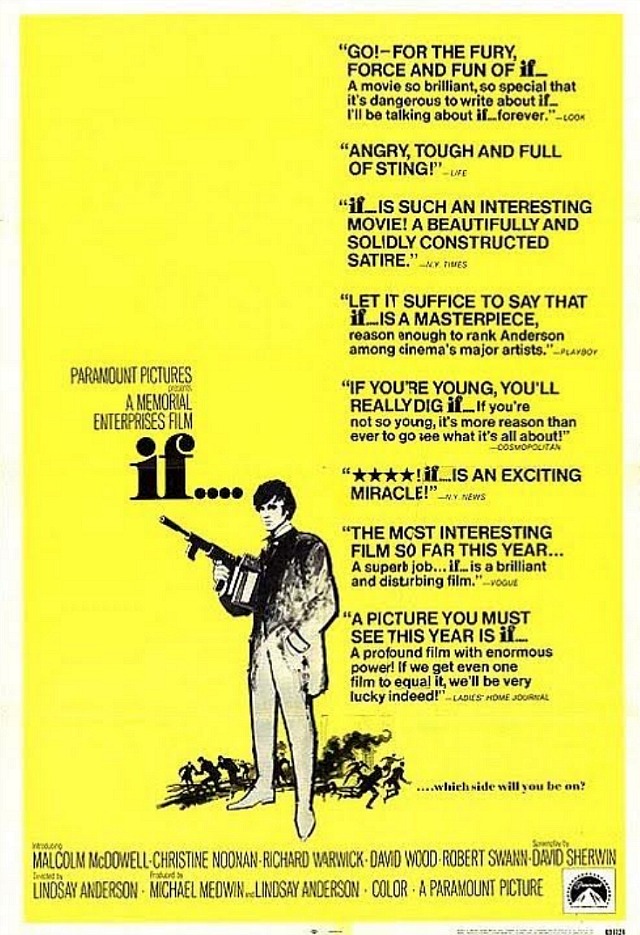