A little voice is asking why are Hillary Clinton and other Democratic establishment voices (including The New York Times) trying to unambiguously discredit Rep. Tulsi Gabbard by declaring she’a some kind of Manchurian Candidate? This level of disparagement feels suspicious. A non-interventionist against regime-change wars, sure, but the last time I checked she was also a Bernie-adhering social progressive who supports Medicare for All and wants Roe v. Wade strengthened.

AXIOS’ Marisa Fernandez, posted yesterday (10.18): “(a) Gabbard’s foreign policy stances significantly differ from other top Democratic candidates, especially on Syria. She has controversially defended Syrian dictator, Bashar al-Assad, and met with him on a secret trip to Syria in 2017; (b) The New York Times reported that alt-right internet stars, white nationalists and Russians have praised her campaign; (c) CNN analyst Bakari Sellers called Gabbard a ‘puppet for the Russian government.’ He said, ‘That’s not just an allegation…I firmly believe that Tulsi Gabbard stands on that stage and is the antithesis to what the other 11 individuals stand for, specially when it comes to issues such as foreign policy’; (d) At this week’s Democratic debate, Gabbard condemned news outlets like the Times and CNN, saying it was ‘completely despicable’ to call her an asset to Russia.” 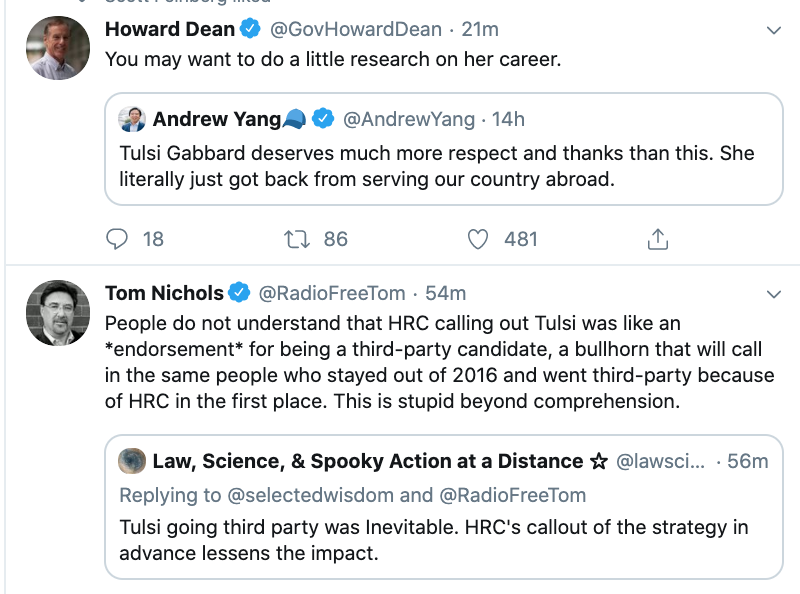