HE is once again urging anyone with the slightest interest in Montgomery Clift to catch Robert Clift and Hillary Demmon‘s Making Montgomery Clift (1091 Media, 88 minutes, currently streaming). As I stated on 10.9, the doc turned out to be much better than I initially expected. I’ve read two Clift biographies (Robert LaGuardia‘s “Monty” and Patricia Bosworth‘s “Montgomery Clift: A Biography“), and I came away from this viewing what felt like a more intimate, finely textured understanding of who the poor guy really was.

The film is basically an assemblage of home movies, tape recordings and talking heads mixed with first-hand narration by co-director Clift, the son of Clift’s older brother, William Brooks Clift (1919–1986) and journalist Eleanor Clift, with creative collaboration from Demmon.

Earlier today reps for the film offered this excerpt in which Clift’s onetime boyfriend Jack Larson (Jimmy Olsen in The Adventures of Superman) recalls the start of their relationship sometime in late ’52 or thereabouts. Merv Griffin was peripherally involved. 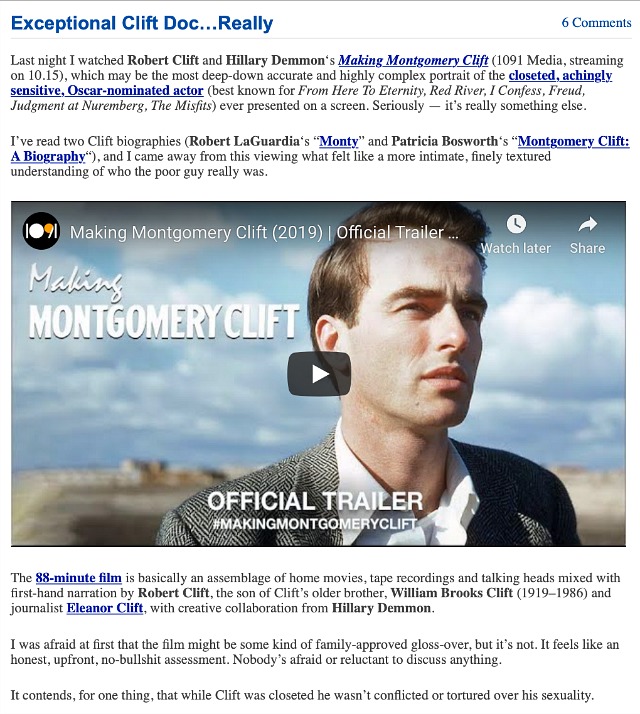 October 17, 2019by Jeffrey Wells11 Comments
« Previous post
Transformers
Next post »
You Can Take The Guy Out of Hoboken…