Last month I mentioned something I’d heard about award-season calculations inside the Netflix compound. It crossed my radar screen just before Telluride, and it came from a trusted colleague who gets around. The rumble was that Netflix was placing most of its award-season hopes upon Noah Baumbach‘s Marriage Story, which has an emotionally relatable story, a well-honed screenplay and dynamic, heartfelt performances from Adam Driver and Scarlett Johansson.

“Not that Netflix doesn’t respect or believe in Martin Scorsese‘s The Irishman,” I wrote, “but that they’re unsure how well a sprawling Lawrence of Arabia-sized gangster film will play with Academy and guild members.” 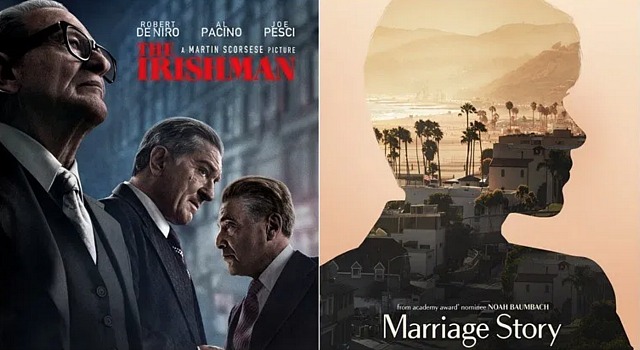 I didn’t immediately recall this observation after being floored by The Irishman last Friday. It actually didn’t hit me until today, to be honest, but I was fairly taken aback once I started thinking about it. How could anyone who’d seen Scorsese’s masterwork believe that Marriage Story, which I totally fell for during Telluride and regard as one of the best of the year so far…how could anyone conclude that Noah Baumbach‘s film had a slightly better shot at Best Picture than the Scorsese?

The thinking, I was told in late August, was that Marriage Story delivers a stronger emotional current than The Irishman, and that emotion always wins the day at the Oscars. That’s true, but the last half-hour of The Irishman delivers a current that feels like melancholy, hand-of-fate heroin, and which sinks right into your bloodstream and stirs you deep down. There’s nothing in Marriage Story, due respect, that comes close to this . It’s a very fine film, but it’s coming from a different place, and generating a different kind of vibe.

On top of which Marriage Story ain’t Kramer vs. Kramer. It’ll be respected and saluted all around, but I’m sensing that the emotional reception…well, we’ll see. Right now Driver and Johansson are in the best shape of all the senior Marriage Story contributors.