Death of the Suit

When Jett graduated from Syracuse in 2010, his mother bought him a nice spiffy suit at Bloomingdale’s. Principally, it was understood, for job interviews and special business occasions. To the best of my knowledge he may have worn it once or twice, but otherwise that lovely suit has done nothing but hang in his closet over the last six or seven years.

For suits…hell, jackets and ties have been fading away for at least that long. Certainly among X-factor Millennial creatives (Jett is a music-industry guy), screenwriters, journalists, Silicon Valley brainiacs, freelancers and gig economy types.

Perhaps not in the Wall Street or banking or governmental realms, but…okay, I don’t really know what I’m talking about as I haven’t done the homework. But I do know I haven’t worn a tie to any social event since Jett and Cait‘s wedding two years ago, and before that Kris Tapley‘s wedding in Palm Springs four or five years ago.

When I want to present myself in a semi-uptown, semi-businessy way I’ll maybe wear a suit and buttoned shirt but without a tie. My recent inclination is to wear a suit jacket along with a black Calvin Klein T-shirt, slim jeans and nice Italian lace-ups (or maybe a pair of black Beatle boots). The way it is. 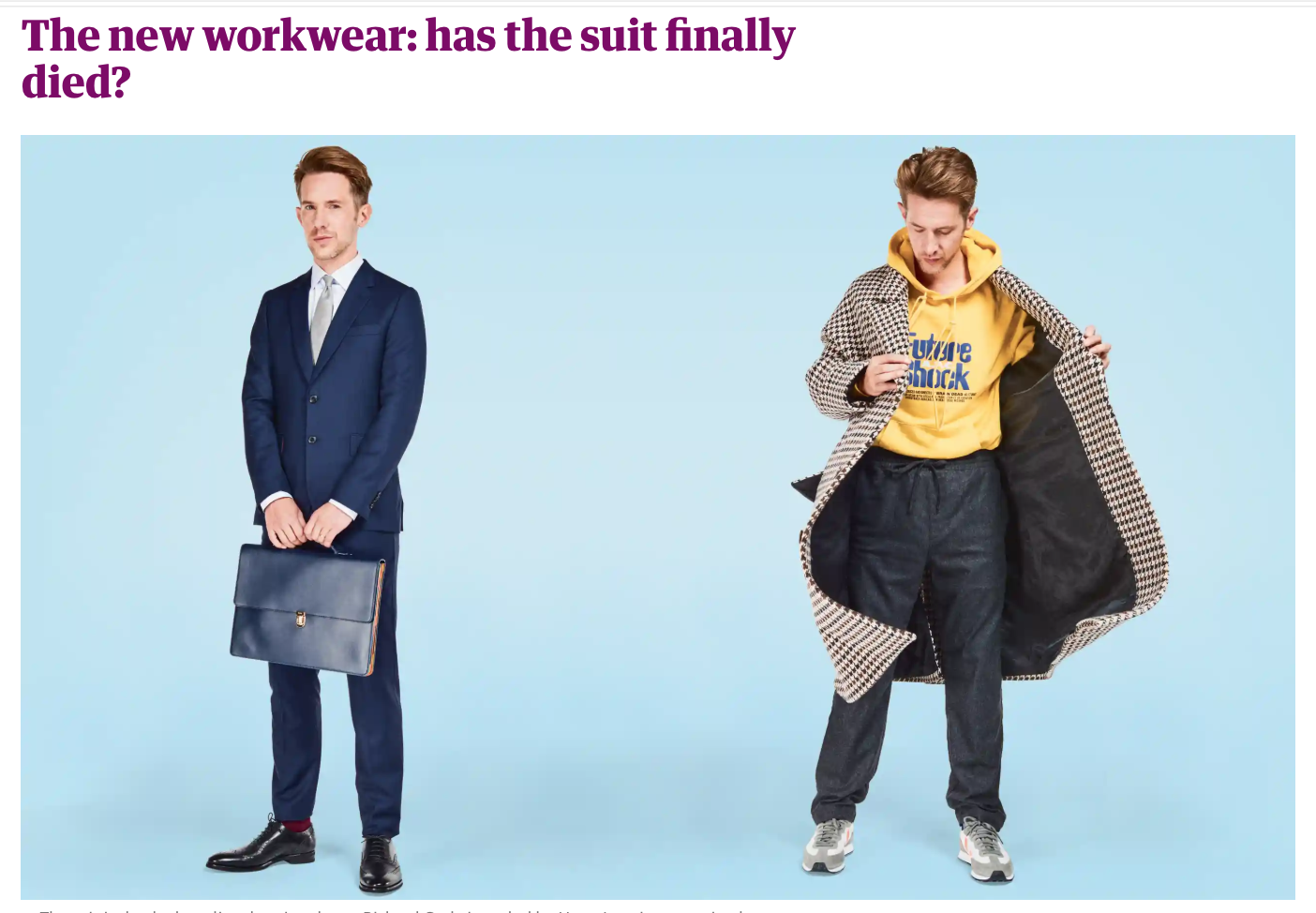 I know that suits, jackets and occasional ties were fairly de rigeur when I attended industry screenings at the Academy in the ’90s and aughts, but over the last eight to ten years Hollywood male dress sense has downshifted big-time. You could even say “fallen off a cliff.” And I’m not just talking about guys who wear gold-toe socks or whose pant cuffs that are two to three inches above the shoe line.

I’ve eyeballed guys at Academy after-parties and said to myself, “Is he kidding? This is his idea of looking semi-dressy or stylishly urban at a big movie premiere? I wouldn’t wear those duds to shop at Walmart.”

Even (or especially) in the face of all this death and decline and sartorial drudgery, I love die-hards who dress with style and angularity. Santa Barbara Film Festival honcho Roger Durling, for one. Always impeccably dressed for any and all occasions, including beach walks. I wish I was in his class.

It’s all been nicely summarized by Richard Godwin in a 10.20 Guardian piece titled “The New Workwear: Has The Suit Finally Died?” Here are two excerpts plus one after the jump: 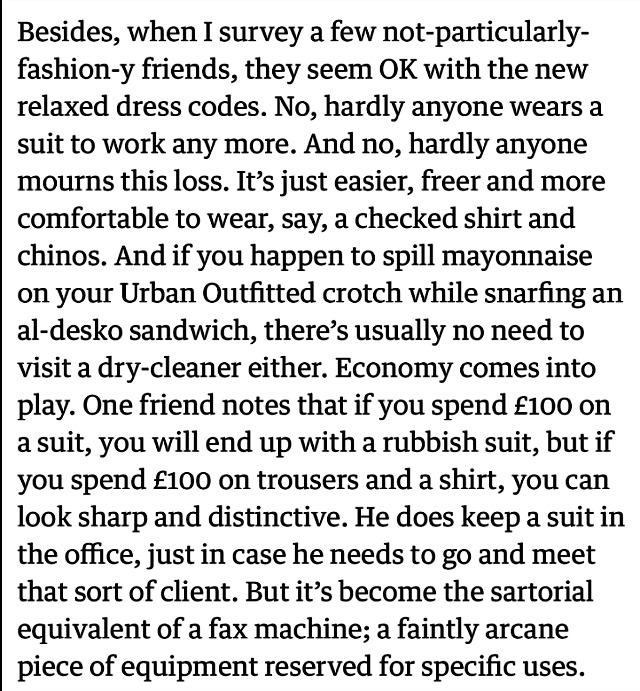 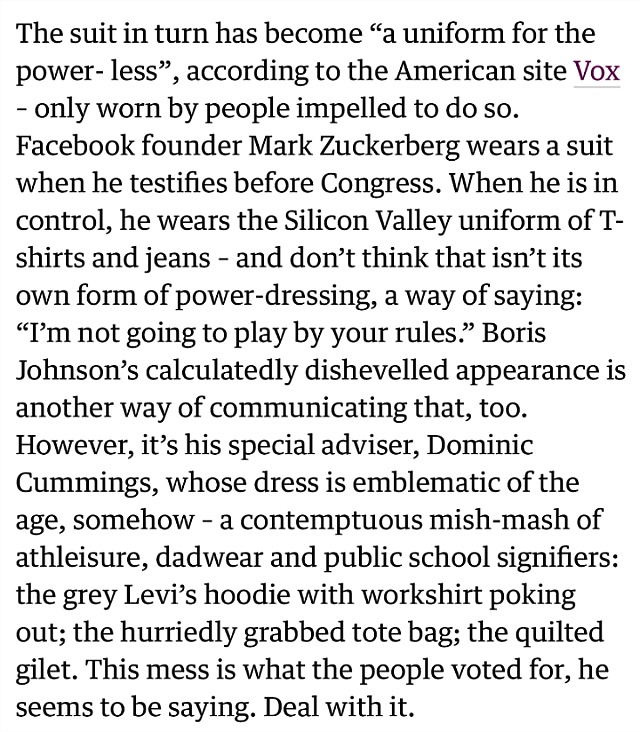 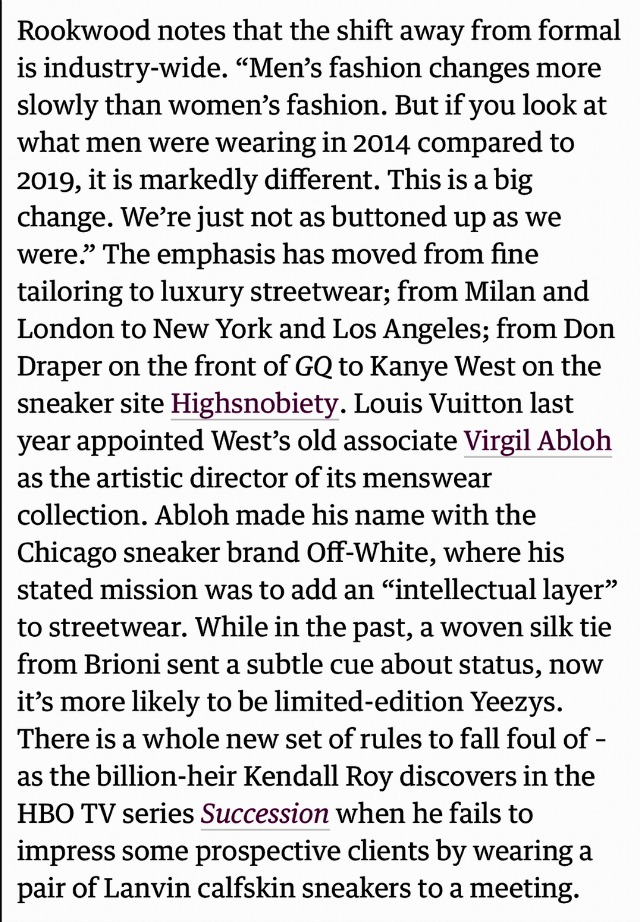