“A Mausoleum of Myths”

Guillermo del Toro‘s 13-part tweet stream on The Irishman is pretty damn good. I’ve pasted six of the tweets in an order that I prefer, as opposed to the order in which GGT posted them. Sorry but I’m allowed to do this. Here’s the whole thing.

Boiled down, GDT is acknowledging or reminding that everybody fucking dies sooner or later, and the “withering on the vine” and assisted living part is no joke, and boy, does this film remind us of where we’ll all headed sooner or later, and that arriving at this point without a George Harrison-like mystical current inside you or, failing that, at least a good spiritual hand-holding current by way of family and friends…approaching the Big Sleep without these things is not advisable. Not having them, in fact, is horrible. Because one way or the other we’re all approaching a Barry Lyndon state of total and absolute equality. 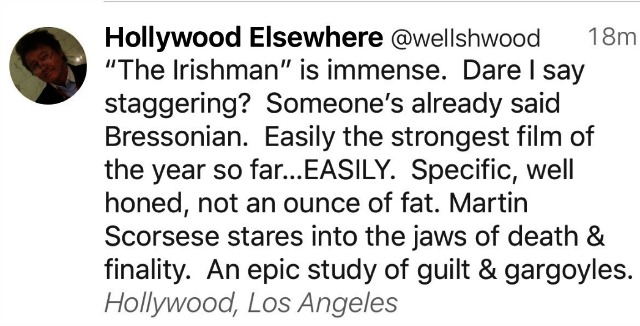