I want a rockstar Democratic candidate for President. Somebody who reminds me somewhat of Bobby Kennedy…someone exceptionally bright and eloquent with that certain hard-to-define quality of extra-ness. I’m serious about the fact that I’ll die if Joe Biden gets the nomination. Okay, I’ll survive but the blood will drain from my face. And if Elizabeth Warren wins I’ll be scared shitless that Trump might beat her. I’ll wind up chewing my nails to the bone.

From “Pete Buttigieg’s Undeniable Allure,” a Walter Shapiro piece in The New Republic: “Four months before the Iowa caucuses, it is time to reckon with the reality that Pete Buttigieg probably has a better chance to be the Democratic nominee than anyone aside from Biden and the surging Warren.

“With Sanders ailing and Kamala Harris sputtering, Buttigieg has enough money to go the distance (he has raised $44 million in the last six months) and enough polling support to guarantee his place on every debate stage. Whatever happens next, this youthful candidate with a long resume (Harvard, Rhodes Scholar, McKinsey analyst, failed statewide candidate, mayor, and intelligence officer in Afghanistan) has already emerged as the political surprise of 2019.” 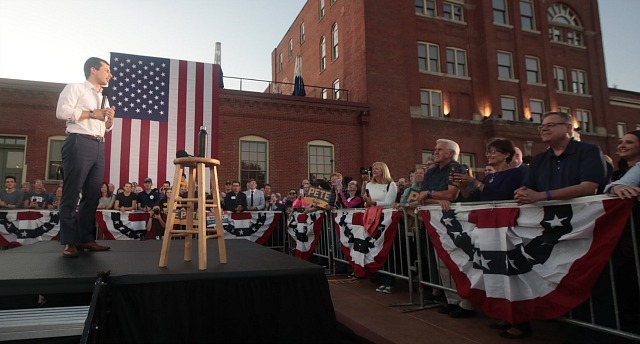 HE acknowledges that Warren and “Typewriter” Joe are approvable candidates if you want to relax your standards and say “okay, yeah, sure…I’d prefer to see either of them be sworn in as President on January 20, 2021…anyone but The Beast.”

But they’re not Mick Jagger candidates, and they never will be. Only Mayor Pete fills that bill. Definitely the only magic-medicine guy out there. On top of which he’s not a woke fanatic (and that’s a huge plus).

But garden-variety homophobes and especially the African-American variety (there’s a real mental blockage against gays in the black community) don’t quite see it that way. And they don’t much care for Warren either. And so we’re still stuck with Droolin’ Joe. And that is such a drag when you consider the kind of transformative Democratic candidates who have run before.

“These are not ordinary times and this is not an ordinary election,” a certain Presidential candidate said 51 and 1/2 years ago. But what are Biden and Warren if not, in a positive sense, ordinary? As in “okay, good people, obviously better than Trump and I’ll definitely vote for one or the other but I have to be honest — neither of them quicken my pulse.”

From Frank Bruni‘s “The Agonizing Imperfection of Pete Buttigieg,” posted on 10.8: “If I dreamed up an ideal Democratic opponent for President Trump in 2020, I’d locate that candidate in the industrial Midwest. That’s where Hillary Clinton lost the last election, and it’s where the next one could very well be decided.

“I’d summon someone relatively young. Elections are usually about the future, and the last two Democrats to ascend to the White House were under 50 when they began their first terms. Plus, the contrast with President Trump, who’s 73, would be a favorable one.

“I’d want someone who could lay claim to being a trailblazer and reap some of the excitement that comes from that; someone who couldn’t be tarred as a Washington insider; someone who was effortlessly fluent in, and respectful of, religion without buying into the divisively censorious strains of it; someone whose message and style weren’t instantly familiar facsimiles of previously successful candidates; someone who radiated the kind of thoughtfulness that’s foreign to Trump.

“Only one of the Democratic presidential aspirants who have gained discernible traction, raised real money and taken up seemingly permanent residence in the field’s Top 5 meets all of the above criteria: Pete Buttigieg, the openly gay mayor of South Bend, Indiana.”