Last night I attended a screening of Benedict Andrews‘ Seberg (Amazon, 12.13), a bland and under-energized dramatization of the FBI’s persecution of actress Jean Seberg for her support of the Black Panthers in the late ’60s and early ’70s. It struck me as the kind of thing that used to be called “an HBO movie” — decent enough but lacking exceptional elements.

The initial plan was for Kristen Stewart, who plays the titular tragic character, to stop by for a post-screening q & a, but she couldn’t attend for whatever reason. HE guess: Some kind of personal issue. Maybe her spirit wilted.

I know that despite a lot of pans for the film Stewart’s performance has been generally praised. I don’t know, man. While I worshipped her wonderfully skittish existential performance in Personal Shopper, she seemed to be more or less playing herself in Seberg. I know her manner and her behavioral tics like the back of my hand, and she seemed to be more or less defaulting to them. That’s not a bad thing per se, but it does put you in a kind of ho-hum place. 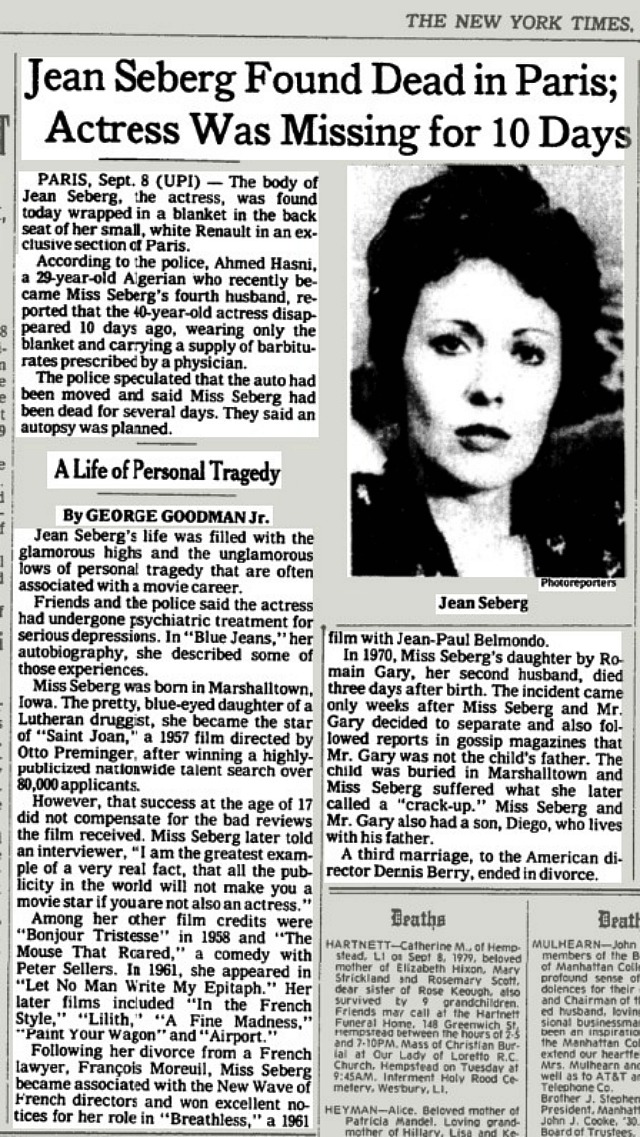 Joe Shrapnel and Anna Waterhouse‘s screenplay pays an awful lot of attention to the FBI guys who were assigned to shadow and harass Seberg (principally Jack O’Connell‘s Jack Solomon, a young straight-arrow with a certain compassion for Seberg, and secondarily Vince Vaughn and Colm Meaney as a couple of bureau dickheads).

Here’s the thing: To go by any biographical summary or link file about this period in Seberg’s life, her worst emotional trauma was triggered by the FBI’s planting of a false rumor (via columnist Joyce Haber) that the father of her unborn daughter was Black Panther Raymond Hewitt, and not husband Romain Gary.

Seberg was so devastated by this phony allegation that she suffered a miscarriage. And yet neither Seberg nor Gary were faithful to each other during their eight-year marriage, and Seberg had always been quite the libertine, and was fairly open about it. So what’s the big deal if she’s pregnant by someone other than Gary? She was, after all.

As the movie notes, Seberg had a brief thing with Hakim Jamal but she also fell into a breathless on-set affair with Clint Eastwood during the making of Paint Your Wagon. (The movie totally ignores this.) While filming Macho Callahan in Mexico in 1969–70, Seberg became romantically involved with a student revolutionary named Carlos Ornelas Navarra. She gave birth to Navarra’s daughter, Nina Hart Gary, on 8.23.70.

And yet Seberg had totally freaked and undergone a meltdown when the Hewitt rumor surfaced. Nina died two days after being born (on 8.25.70), and right after that Seberg held an open-casket wake in her home of Marshallton, Iowa, to show observers that her baby was white. Seberg was so distraught by Nina’s passing that she reportedly attempted suicide on multiple anniversaries of the child’s death.

Why doesn’t Seberg mention the Hewitt rumor? (The film says that the only Panther in Jean’s life was Jamal.) Why doesn’t it include a scene in which she gives her infant daughter an open-casket funeral? That would be a fairly striking thing to include, no?

My guess is that Andrews and the screenwriters decided that Seberg losing her shit over a rumor about she was allegedly carrying an interracial baby would rub wokesters the wrong way.

This is one of the things about Seberg that bothers me. It doesn’t just feel bland, but a little bit chickenshit. 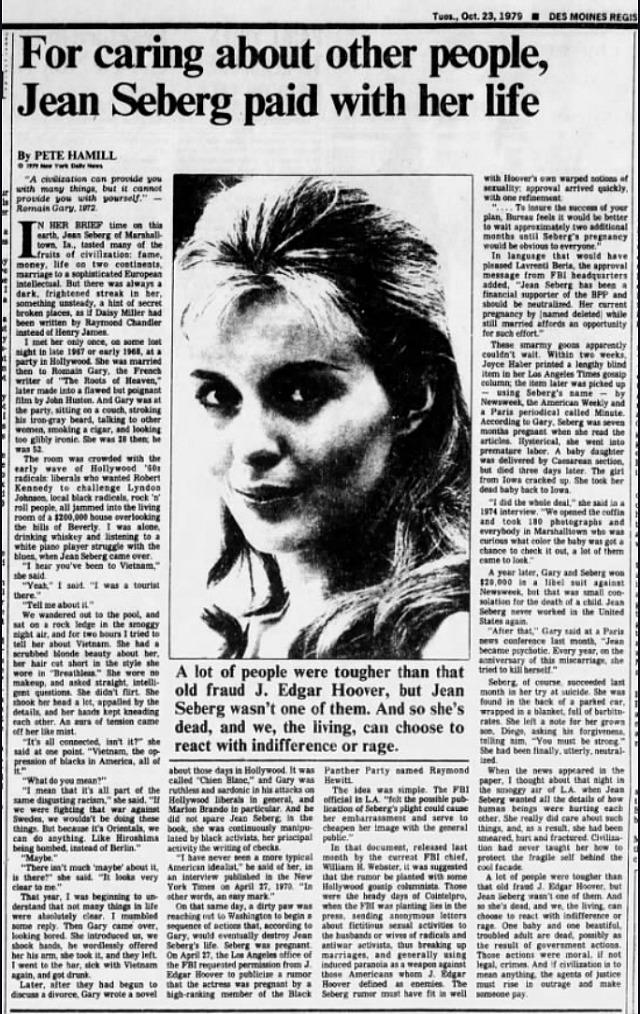