For years I’ve been trying to buy or stream Martin Scorsese and Kent Jones‘ Letter to Elia, which I saw once at the 2010 New York Film Festival. It’s basically Scorsese talking about his worship of Elia Kazan over the decades, and “a delicate and beautiful little poem,” as I wrote nine years ago. It’s one of the most touching docs of this sort that I’ve ever seen.

But you can’t buy a stand-alone DVD or Bluray version, and you can’t stream it. It’s part of Fox Home Video’s Elia Kazan Collection, but I can’t find it anywhere. (In my home, I mean — I bought it in 2010.) Nine years ago it played on PBS‘s American Masters series, but right now there’s only a webpage.

The blockage presumably boils down to a rights issue. Two or three years ago I asked Jones why it’s unviewable (except for the box set), and he mumbled a non-response. I took that to mean that the absence of Letter to Elia is a conversational non-starter.

Posted on 11.24.10: “Letter to Elia is a personal tribute to a director who made four films — On The Waterfront, East of Eden, Wild River and America America — that went right into Scorsese’s young bloodstream and swirled around inside for decades after. Scorcese came to regard Kazan as a father figure, he says in the doc. And after watching you understand why.

“It’s a deeply touching film because it’s so close to the emotional bone. The sections that take you through the extra-affecting portions of Waterfront and Eden got me and held me like a great sermon. It’s like a church service, this film. It’s pure religion.

“More than a few Kazan-haters (i.e., those who couldn’t forgive the director for confirming names to HUAC in 1952) were scratching their heads when Scorsese decided to present Kazan’s special lifetime achievement Oscar in 1999. Letter to Elia full explains why, and what Scorsese has felt about the legendary Kazan for the last 55, going on 60 years.” 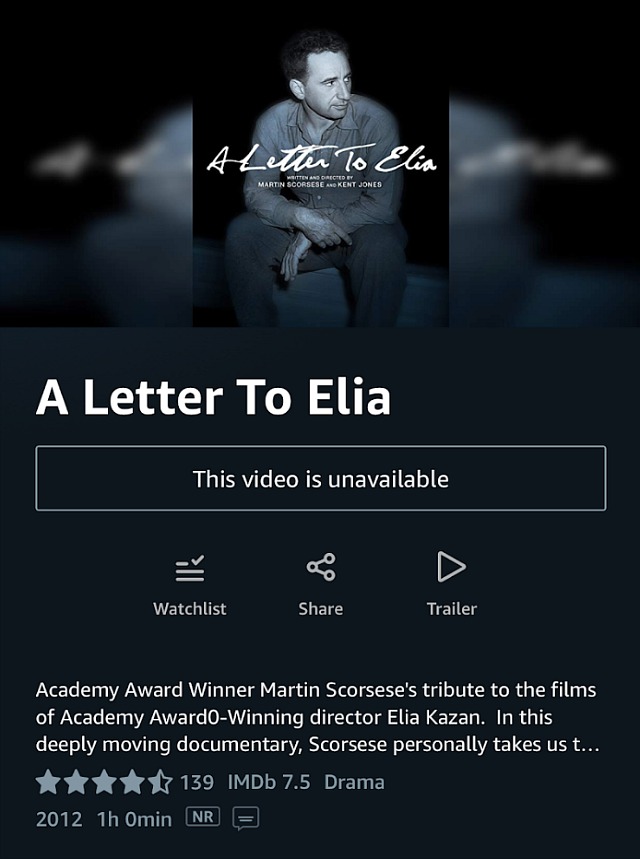