“This is how a narrative gets entrenched,” Harris complains. “There are those who are in, and those who are fighting to get in, and the implicit notion of a quota — the idea that there is one spot for ‘diversity’ — becomes a way of not looking at the performances.” 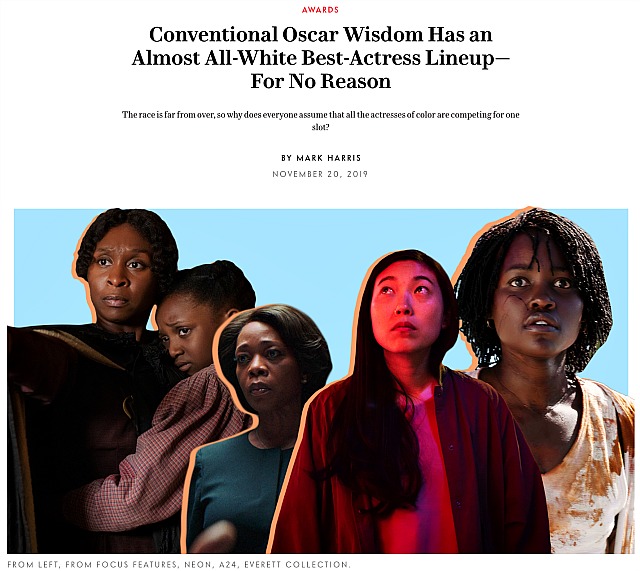 Here’s another factor to consider. Some would say it’s the dominant factor when it comes to acting nominations.

I haven’t seen Clemency because I loathe the idea of watching another film about capital punishment. I’ll get around to it but I shudder. Then again Woodard might shoot to the top of my list after I catch it.

I haven’t seen Harriet because absolutely everyone on the circuit (African American critics included) has told me it stinks.

And in my opinion Jordan Peele‘s Us is an unusual, mildly spooky but minor horror film, and that Lupita Nypng’o delivers a sturdy double performance (predator and prey) but calm down — it’s primarily a Jamie Lee Curtis terrified-victim performance with a doppleganger side order.

Why the hesitancy about Chinonye Chukwu‘s Clemency, especially given the 97% Rotten Tomatoes rating and the fact that everyone’s been raving about Woodard’s performance as a guilt-ridden warden? Because no matter the angle it’s still a downerish flick about state-administered executions, and it’s just human nature to go “yeah, well, okay, I guess I’ll get around to see it one of these days.” I know that I count suffering through The Green Mile as one of the worst moviegoing experiences of my life.