As a longtime fan of Karina Longworth‘s You Must Remember This podcasts, I’ve been meaning all month to settle in with her Song of the South series, a six-episode historical examination of Disney’s most controversial film. This weekend, I’m thinking.

A friend tells me that Longworth’s take is properly lamenting and damning, but that things turn sour in episode #5, which deals with Blaxploitation and the White Backlash of the ’80s.

No one’s disputing that Song of the South contains antiquated, unfortunate and subliminally ugly racial stereotypes in certain portions. Has anyone listened to the five Longworth episodes that have been posted, and if so what’s your take on it?

Everyone understands that Song of the South is an unfortunate relic of a long-past era, of course, but that it’s technically fascinating and quite the achievement for 1946. I’ve only seen excepts from this 1946 Disney release — never the whole thing. And I’d love to see a high-def version just to appreciate the live-action-blended-with-animation material, not to mention the fact that Gregg Toland was the dp. 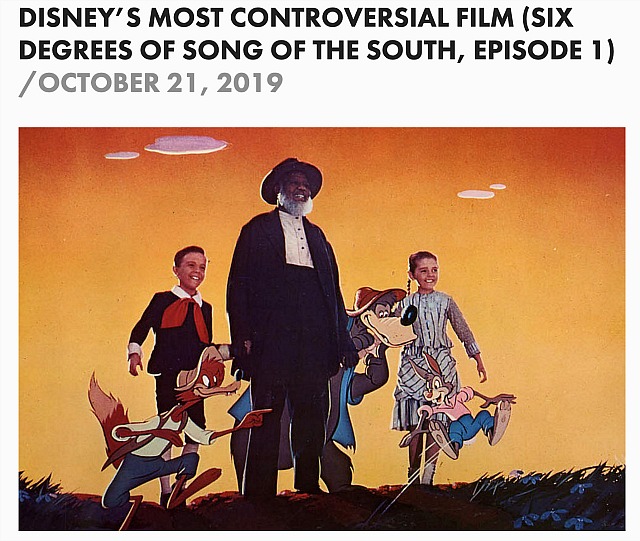 Longworth may differ, but it’s been alleged here and there that Song of the South isn’t quite as racially toxic as its reputation suggests.

A little more than a month ago HE commenter “Bad Hat Harry”, who’s seen some kind of bootleg copy, maintained that “it’s a perfectly charming, sweet-natured thing, and the only subtextual racial politics one could reasonably read into it have to do with reconciliation, harmony and respect. Uncle Remus is a wonderful character, [and] the stories are all-timers.”

In the same thread HE commenter (“Lord of Misrule“) stated the following: “I have watched this several times and cannot, for the life of me, fully understand what all the fuss is about. There is not one African-American character in the entire movie [who] is not treated with the utmost regard. At one point, one of the characters actually ‘permits’ her son and daughter to play with another black child so they can play together. At another time that same character regretfully, almost tearfully, has to ask Uncle Remus not to keep telling his stories because her (white) child acted irresponsibly.