Posted today at 4 pm Pacific: “For me, for the filmmakers I came to love and respect, for my friends who started making movies around the same time that I did, cinema was about revelation — aesthetic, emotional and spiritual revelation. It was about characters — the complexity of people and their contradictory and sometimes paradoxical natures, the way they can hurt one another and love one another and suddenly come face to face with themselves.

“It was about confronting the unexpected on the screen and in the life it dramatized and interpreted, and enlarging the sense of what was possible in the art form.

“And that was the key for us: it was an art form. There was some debate about that at the time, so we stood up for cinema as an equal to literature or music or dance. And we came to understand that the art could be found in many different places and in just as many forms — in The Steel Helmet by Sam Fuller and Persona by Ingmar Bergman, in It’s Always Fair Weather by Stanley Donen and Gene Kelly and Scorpio Rising by Kenneth Anger, in Vivre Sa Vie by Jean-Luc Godard and The Killers by Don Siegel.” 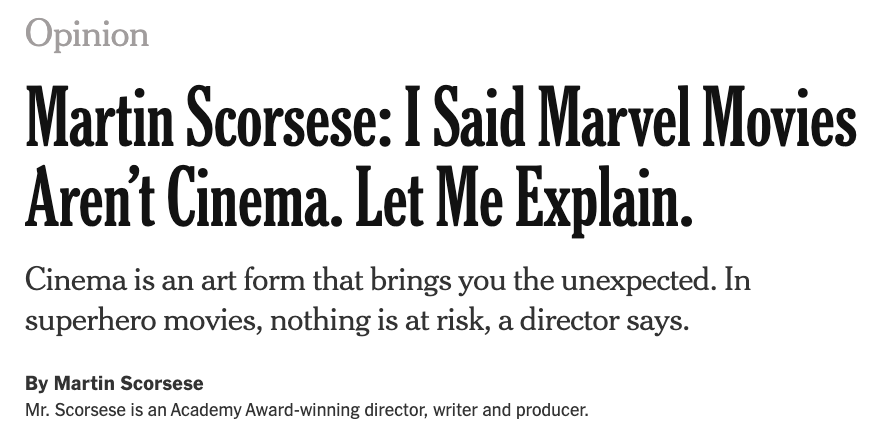 HE insert: Scorsese prefers the drably photographed, TV-movie-ish version of The Killers just because Don Siegel directed it, and not Robert Siodmak‘s deliciously noirish The Killers (1946) with Burt Lancaster, Edmond O’Brien, Ava Gardner and Sam Levene?

Back to Scorsese: “Some say that Alfred Hitchcock’s pictures had a sameness to them, and perhaps that’s true — Hitchcock himself wondered about it. But the sameness of today’s franchise pictures is something else again. Many of the elements that define cinema as I know it are there in Marvel pictures. What’s not there is revelation, mystery or genuine emotional danger. Nothing is at risk. The pictures are made to satisfy a specific set of demands, and they are designed as variations on a finite number of themes.

“They are sequels in name but they are remakes in spirit, and everything in them is officially sanctioned because it can’t really be any other way. That’s the nature of modern film franchises: market-researched, audience-tested, vetted, modified, revetted and remodified until they’re ready for consumption.

“Another way of putting it would be that they are everything that the films of Paul Thomas Anderson or Claire Denis or Spike Lee or Ari Aster or Kathryn Bigelow or Wes Anderson are not. When I watch a movie by any of those filmmakers, I know I’m going to see something absolutely new and be taken to unexpected and maybe even unnameable areas of experience. My sense of what is possible in telling stories with moving images and sounds is going to be expanded.

“So, you might ask, what’s my problem? Why not just let superhero films and other franchise films be? The reason is simple. In many places around this country and around the world, franchise films are now your primary choice if you want to see something on the big screen. It’s a perilous time in film exhibition, and there are fewer independent theaters than ever. The equation has flipped and streaming has become the primary delivery system.

“Still, I don’t know a single filmmaker who doesn’t want to design films for the big screen, to be projected before audiences in theaters.”

November 4, 2019by Jeffrey Wells68 Comments
« Previous post
Obviously. Not. Lying.
Next post »
Can’t Wait To Not See This