Aiello In The Clouds

Would it have killed Sal, the pizzeria owner in Do The Right Thing, to mount a few photos of African-American cultural heroes (Muhammud Ali, Malcolm X, etc.) alongside the usual portraits of Frank Sinatra, Enrico Caruso, Fiorello LaGuardia and Vito Corleone? It was Sal’s restaurant, sure, but his customers were mostly African-American and Fort Greene, at the time, was a mostly African-American neighborhood. Almost anyone would have realized that sharing the wall was a smart move.

But not Sal. Because he was a proud, mouthy, pugnacious, under-educated cannoli prole who tended to argue first and think about it later.

Which is why Spike Lee hired the late Danny Aiello to play him. Because Aiello exuded white, working-class Italian-American culture without saying a word. No matter who he played, Aiello always seemed earthy, a bit anxious, wary, unsettled and on the bulky side. His characters always had something to prove. He could have never played an effete university professor or a wealthy architect. Well, perhaps he could have but he never did.

The 86-year-old Aiello died today (or last night) at a hospital in northern New Jersey. He had a home in pricey Saddle River, but he came from a New York City background that was all pizza and meatballs and subway rides and snowcones. Born in Manhattan to a large family, raised in the Bronx…a New Yorker and a New Jerseyan through and through.

My favorite Aiello performance? One of the especially fucked-up guys in a 1984 (or ’85) N.Y. Broadway production of David Rabe‘s Hurlyburly.

HE’s favorite Aiello screen perfs: Moonstruck, The Purple Rose of Cairo, Ruby, Harlem Nights, Léon: The Professional, 2 Days in the Valley. I never ever saw his performance as Don Domenico Clericuzio in the miniseries The Last Don (’97).

I never understood why Aiello’s assassin said “Michael Corleone says hello!” just before he attempted to strangle Michael Gazzo‘s Frankie Pantangeli in The Godfather, Part II. The hit was ordered by the Rosato brothers, of course. Aiello’s assassin had every expectation that Pantangeli wouldn’t survive so what difference does it make if he believes during his final seconds of life that Corleone was behind it or not? 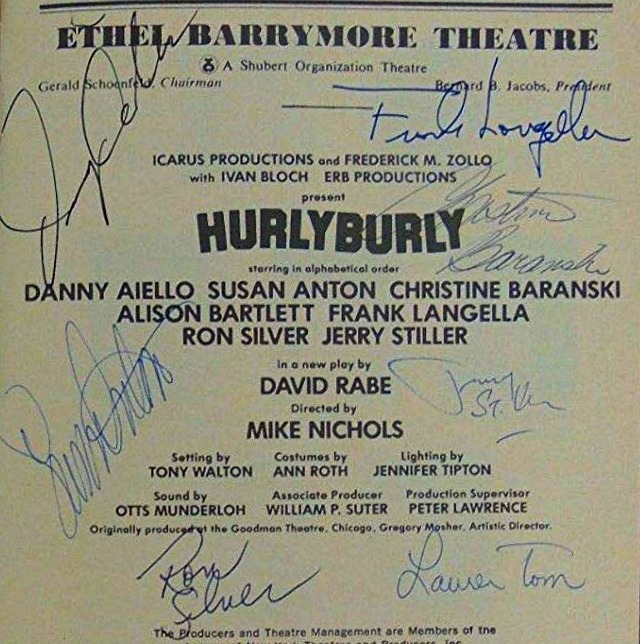