AJC, Singer to WB, Eastwood: “Go Ahead, Make Our Day”

The AJC and Singer are “asking” that the producers “issue a statement acknowledging that some events were imagined for dramatic purposes, and that artistic license and dramatization were used in the film’s portrayal of events and characters,” as Riley has explained in a 12.9 email. “In addition, we’re requesting a disclaimer to that effect be added to the film’s credits.”

The AJC beef is basically about an implication in the film that AJC reporter Kathy Scruggs, portrayed in Richard Jewell by Olivia Wilde, used sexual favors to obtain information from law enforcement sources.

Riley: “We welcome the accurate telling of Richard Jewell’s story. In fact, the AJC worked closely with the Atlanta History Center on a recent program that focused on a definitive new book on the subject by a former Wall Street Journal reporter and the former U.S. Attorney who handled the case. We recognize that the AJC, and the news media in general, are not above criticism.

“We can’t be silent when a film that purports to take the media to task engages in the very behavior that it criticizes. I feel compelled to stand up for the dedicated journalists who work for the AJC — otherwise a deceased reporter will be maligned in movie theaters across the country and around the world. This is especially concerning at a time when the nation’s leading news organizations are being attacked.” 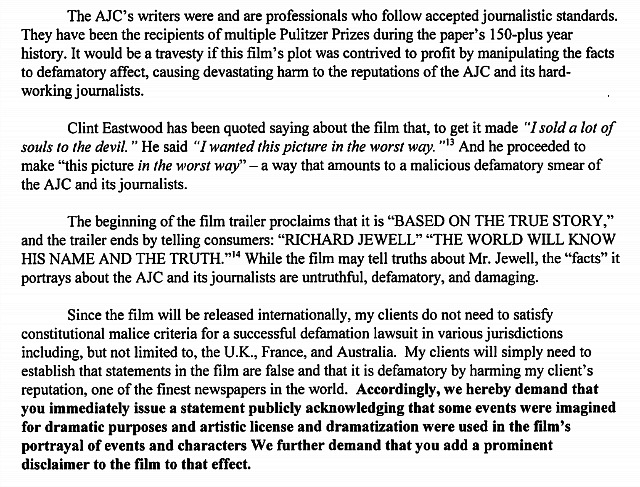