Another “Women Directors Are Being Shafted” Thang

The merde hit the fan three days ago when the Golden Globe award nominations were announced minus any prominent women (Little Women‘s Greta Gerwig, The Farewell‘s Lulu Wang, Queen & Slim‘s Melina Matsoukas) nominated for Best Director, or their films nominated for the Best Motion Picture prizes.

The same “holy moley” reaction happened on Tuesday when the SAG noms failed to include Little Women, etc.

Many angry reactions have been heard (including a claim by Matsoukas that a majority of the Golden Globe nominating committee blew off screenings of her film), but today the N.Y. Times weighed in with another complaint piece, passing along the same stuff that others have been tweeting since Monday.

Reported by Nicole Sperling and Brooks Barnes, the article embraces the progressive party line — i.e., lamenting an apparent “man tsunami” and asking “where are the women?”

The Times article has only one dissenting quote, taken from a great, independent minded piece about this topic on 12.10 by Awards Daily‘s Sasha Stone; “‘Pick a woman, any woman’ seems to be the message,” Stone is quoted as saying. “Many prominent voices refuse to accept the possibility that the five best movies of the year might be directed by men.”

Excerpt: “Women have come a long way in Hollywood since 2017, when the #MeToo and Time’s Up movements swept the culture — maybe so far that the film establishment, still overwhelmingly male, is reflexively trying to throw on the brakes, said Cantillon, who has been a member of the Academy of Motion Picture Arts and Sciences since 2017. ‘I think there was all this support for the resistance,’ she said, ‘and then they were like ‘Whoa, not so fast.’” 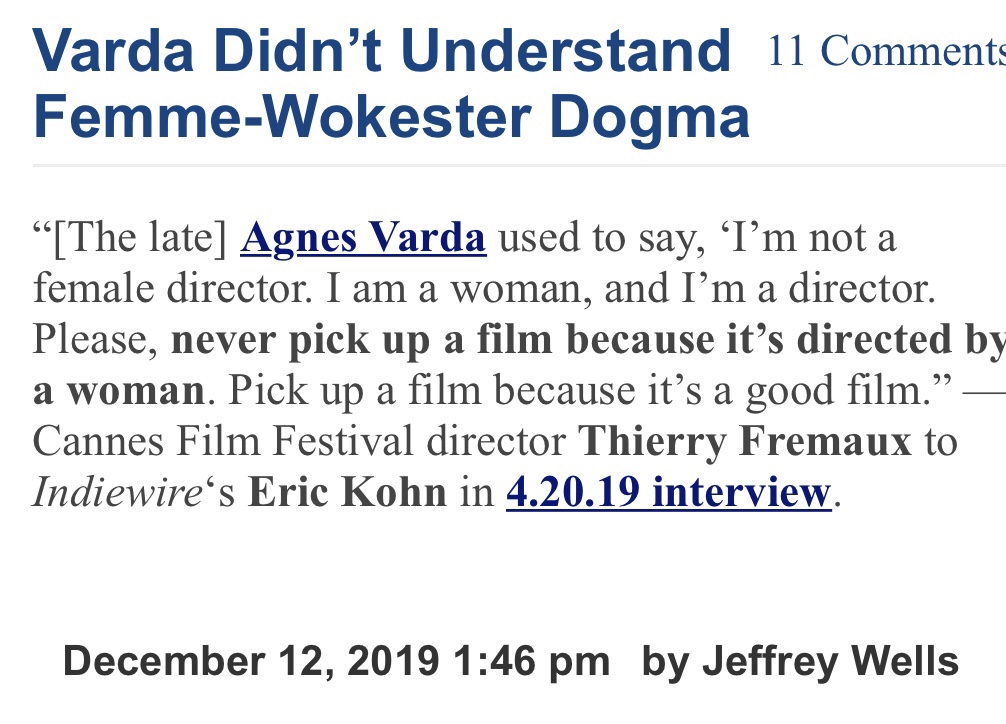