Progressive Hollywood and “gender equity watchdogs” are raging over four top-ranked female directors — Little Women‘s Greta Gerwig, The Farewell‘s Lulu Wang, Hustler‘s Lorene Scafaria and It’s A Beautiful Day in the Neighborhood‘s Marielle Heller — not being nominated for any significant Golden Globe awards. Not for Best Director, I mean, and not for Best Picture in either dramatic or comedy/drama categories.

If you leave aside notions of quotas and gender equity, the truth is that three of these films — Gerwig’s, Heller’s and Scafaria’s — could be fairly described (and are generally regarded) as somewhere between agreeable, good and better-than-pretty-good.

Neighborhood has a fine supporting performance (Tom Hanks as Fred Rogers) and a great third act scene (Rogers visits Lloyd’s dying dad) but the rest is just…well, good enough. Gerwig’s Little Women is very well liked in certain quarters, I realize, but it has struck more than a few as somewhat flawed and occasionally irksome. Scarfaria’s Hustlers is a fine, feisty, fact-based thing about Scores dancer scamming Wall Street wolves, but it’s an A-minus at best and realistically more of a B-plus. Be honest. 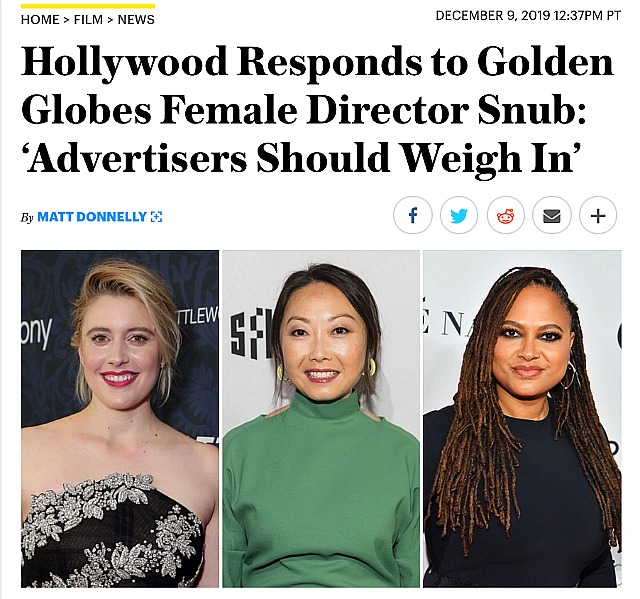 I believe that Wang’s The Farewell is a fresher, stronger, more emotionally gripping film than The Two Popes, so if you’re talking about switching out one of the five nominees for Best Motion Picture, Drama, there’s your trade — The Farewell goes in and The Two Popes drops out.

But as God is my witness, there’s no way in hell that one could make a reasonable argument for Little Women, A Beautiful Day in the Neighborhood or Hustlers being more transporting or historic or eye-opening than Martin Scorsese‘s The Irishman, Sam Mendes‘ 1917 or Todd Phillips‘ Joker.

You could make an argument that Noah Baumbach‘s Marriage Story is a candidate for possible substitution, but tell me how the arguments would go that Little Women, It’s A Beautiful Day in the Neighborhood or Hustlers are fuller meals or more humanist or more grounded in human vulnerability. I’d really like to hear those arguments.

HFPA president Lorenzo Soria to Variety: “What happened is that we don’t vote by gender. We vote by film and accomplishment.”

Globes exec producer Barry Adelman: “Every year, somebody gets left out. There’s so much talent going on, maybe we need to expand the categories so more people can be part of it. I also think that if you look at some of the other things…a lot of the big television shows are created by women, so I think across the board there is a good representation. Maybe in a couple of those categories, we wish it could be a little different. Who knows what will happen next year?”